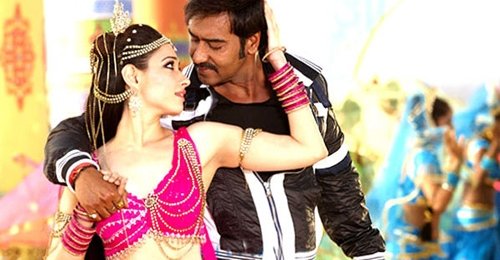 It must take a special kind of skill to remake a mediocre film like 1983’s Himmatwala without even marginally improving on it. Director Sajid Khan’s potpourri of excessive melodrama, puerile humor, cartoonish action, and garish songs plods on for two-and-a-half hours with little concern for your bladder or your mental health.

The all-new Himmatwala has many of the same problems that plagued the earlier film, and a few new ones of its own. Chief among these is its inability to decide what it wants to be – an honest remake, evocative of the tone and spirit of those 80s ‘Madras potboilers’, or a tongue-in-cheek spoof of that very genre.

Ajay Devgan is Ravi, our nostril-flaring hero who returns to the village of his birth seeking vengeance on the man who destroyed his family. Sher Singh (Mahesh Manjrekar) is the gentleman in question, although his actions are most ungentlemanly. He’s the oppressive, land-grabbing sarpanch of the village who’s instilled fear in the hearts of locals.

To be honest, Sajid Khan doesn’t so much direct, as he launches an assault on our senses with a string of tired clichés you thought you’d seen the last of – the hero’s widowed mother who repeatedly binds him in a “maa ki kasam”, his unfortunate sister who only exists to be raped by the villain’s henchmen and tortured by her in-laws, the villain’s spoilt but good-hearted daughter who falls for the hero much to her father’s disdain, and even an old foe who turns up at a crucial moment to help the hero in return for sparing his life earlier…that character, by the way, is played by a tiger!

But Himmatwala is intended as much as a comedy as it is a revenge saga, even if the humor alternates between regressive and plain pedestrian. Sher Singh’s daughter (Telugu star Tamannah) carries around a whip and declares: “I hate gareebs!”. Paresh Rawal, playing Sher Singh’s sidekick brother-in-law is always ready with an obvious pun. The only genuinely clever bit is a black-and-white spoof on the infamous shower scene from Psycho, but it’s too smart for this film.

Packed from start to finish with too many underwhelming action scenes, and song sequences that pale in comparison to Jeetendra and Sridevi’s matka-jhatkas, the new Himmatwala is a busy, crowded film but one that’s deathly dull in the final reckoning. So predictable and boring in fact, that Rohit Shetty’s films feel like Citizen Kane in comparison.

Amidst the sea of hammy performances, it’s Ajay Devgan, expectedly, who manages not to entirely embarrass himself. He pummels the bad guys competently, and carries off some of the film’s corny lines without tripping. But it’s such a shame to watch this reliable, robust performer reduce himself to appearing in this drivel.

I’m going with one out of five for director Sajid Khan’s Himmatwala. The movie opens with a disco song featuring Sonakshi Sinha that goes: “Thank God, it’s Friday!”

Not this Friday, believe me.