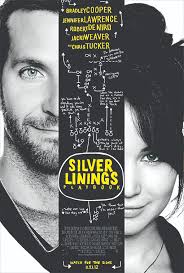 Unlike a lot of other people, I had never been in awe of David O. Russell. Blame it on the fact that I’ve seen only one of his movies – the excellent The Fighter – which isn’t really enough. Plus, Bradley Cooper? You mean that The Hangover guy? I’ve never liked the series much (The Hangover Part 2 was downright horrible), so there was the “eh?” factor. Plus there was Jennifer Lawrence, who wasn’t that special in my view – great in The Hunger Games, average in X-Men: First Class, and intensely over-rated in Winter’s Bone. So it is with enormous delight that I tell you that I have never been happier to have been proved wrong on so many counts. In fact, this film is the closest to perfection that I have watched in quite some time.

The story of the film follows a pretty unconventional romantic comedy model, revolving around a married bipolar man recently released from a mental institution, and his fiery interactions with a swingingly depressed-then-mad widow, and how their quirky, dark and hilarious lives intertwine to give the perfect ending, despite all of society’s obstacles. One can’t go in with much baggage, though Russell seems to be on solid ground. The end product, however, dazzles like nothing else.

The acting is par excellence. Bradley Cooper stuns in his role as Pat Solitano, completely knocking it out of the park, bringing vulnerability, arrogance, a chronic lack of understanding and a fantastic comic timing; he became something of an obsession for me post this film, and he’s arguably the best part of this movie. Jennifer Lawrence charms through her role as Tiffany Maxwell, showcasing all the craziness that hides deep feelings and a pretty complex character in general; definitely one to look out for, though perhaps not all that deserving of the Oscar. Robert DeNiro delivers his best work in ages, displaying a surprising comic edge and yet being very emotional as the guilty and disappointed OCD-inflicted father. Jacki Weaver, the only technically sane person in the family, has a somewhat limited role, but she absolutely shines in it; one will be floored by the expressiveness of her eyes, or the meaning she brings to her every gesture. Anupam Kher does decent work, and rises up especially in the later parts of the film. The rest of the supporting cast do fabulous jobs as well.

But this film totally belongs to the director. Showing a remarkably sharp and balanced hand, Russell expertly guides the film through all of its laugh-out loud sequences, its intensely emotional moments and the dark phases where each person’s base feelings come out (with a special mention to the recurring sibling rivalry). In fact, he’s done what very few people can do – create an enormously entertaining art film, one that will touch hearts while leaving you praising it. The only slightly negative aspect of this film was its climax, which became predictable, but that’s a very minor quibble in this fantastic film. In simple terms, you would be criminally robbing yourself of a once-in-a-lifetime movie experience if you didn’t watch this. Unless Life of Pi, Beasts of the Southern Wild or Amour turn out to be absolute classics, Silver Linings Playbook would be my pick for Best Picture at the Oscars.