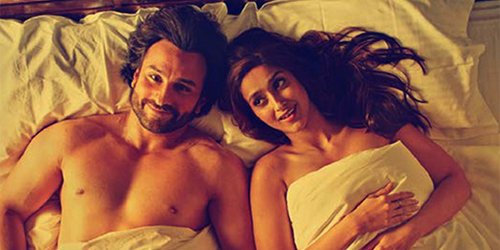 Happy Ending, directed by Go Goa Gone’s Raj Nidimoru and Krishna DK, is a neatly packaged piece of fluff pretending to be smarter than it actually is. This is cotton candy trying to pass off as caviar. A predictable romantic comedy disguised as a cheeky comment on the predictable nature of romantic comedies. Get it?

Set for no particular reason in Los Angeles, the film stars Saif Ali Khan as Yudi, the author of a best-selling novel who has failed to live up to the promise he showed at the time of his breakout debut five-and-a-half years ago. Cash-strapped and nowhere close to starting his second book, he reluctantly agrees to pen a “kickass” script for an ageing Bollywood star, Armaan (Govinda), who wants to reinvent himself.

The chief conceit here is that even as Yudi struggles to write the sort of tried-and-tested rom-com that Armaan is insistent on, his own life has begun to closely follow the blueprint of one of those typical ‘romedies’. Notoriously allergic to commitment, Yudi is enjoying a platonic friendship with Aanchal (Ileana D’cruz), a hot new writer on the block who churns out sappy romantic fiction but wants no emotional attachments either.

It doesn’t take a genius to figure out where this film is headed. The writers stick faithfully to the rulebook of rom-com plotting and give us one over-familiar scenario after another. The road-trip, the shared hotel room, the teary goodbye, the dash to the airport – it’s all there! Which is a shame, because originality and unpredictability were the very strengths that gave the directors’ previous films (particularly Shor in the City and Go Goa Gone) an edge over Bollywood’s usual fare.

Some of the more enjoyable moments in Happy Ending are between Yudi and his best friend Montu (Ranvir Shorey), who looks forward to their occasional drinking binges if only to escape his ball-busting wife. Kalki Koechlin is terrific as Vishaka, Yudi’s clingy former girlfriend to whom he hasn’t quite been able to convey that they’re broken-up already. The film is stuffed also with a pair of starry cameos by Kareena Kapoor and a sweetly understated Preity Zinta, both playing Yudi’s exes. You’ll have much less patience for his alter ego Yogi (also played by Saif), an overweight slob who shows up repeatedly to dispense words of wisdom to our often-conflicted protagonist.

As you can see this is a busy film, with multiple characters and as many narrative threads. Still there are chunks where not much happens; you’ll find your interest waning in the long-drawn scenes where Yudi and Aanchal are supposedly warming up to each other. Unfortunately the romance between them feels forced and entirely contrived, and it certainly doesn’t help that Saif and Ileana’s chemistry is colder than an iced popsicle. There are more sparks in the scenes between Yudi and Armaan, not only because Govinda still has sharp comic timing, but because the writers do a bang-up job of spoofing the bizarre business of Hindi-film making.

It’s easy to see why Happy Ending doesn’t work after all. This is a film that wants to be many things all at once – a rom-com between a fading star and the next big thing, also a clever satire on Bollywood. It’s overlong at 135 minutes, and on occasion dreadfully boring. Saif Ali Khan can still pull off goofy humor better than most others, but how many times does he have to play the same part before we can all agree that he’s too old for this schtick?

I’m going with a generous two out of five for Happy Ending. You’ll only be truly happy at its ending.