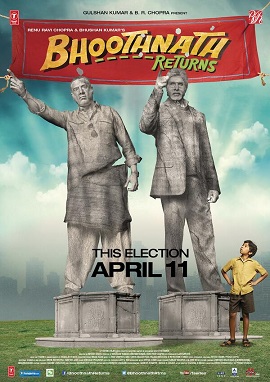 To counter the dearth of hits year after year, film-makers and leading Studios — also actors — have formulated a strategy to woo spectators in hordes: Sequels. The general feeling is, a follow-up to a successful film, by and large, rakes in enormous moolah at the ticket window. Luckily, the success ratio of sequels has been optimal, hence bigger and better installments are being designed by the creative brains this side of the Atlantic. Noticeably, it’s raining sequels in Bollywood these days.

For any product to leave an impression, it’s imperative that the spectator’s eyes do not stray from the screen. Neither should his/her attention vacillate from the goings-on. The sequel ought to deliver more than the earlier part. The content ought to be imaginative and inventive… or else, the franchise fatigue sets in instantly.

BHOOTHNATH RETURNS does not take off from where the first part ended. Barring the friendly ghost — the Indian Casper, Bhoothnath — everything that you witness in the second installment is fresh, be it the plot or the characters or the setting. Wait, there’s a new storyteller [Nitesh Tiwari] too. Additionally, this one is coinciding with the elections. The identification with the material is immense, since the film also depicts a corrupt/slimy politician, besides communicating a vital message: The significance of exercising our right to vote.

Does BHOOTHNATH RETURNS ups the ante with a fascinating and captivating plot? Does it pack ample ammunition through those 2.30 hours’ run time? Let’s analyze…

BHOOTHNATH RETURNS takes Bhoothnath’s [Amitabh Bachchan] story forward. As he returns to ‘Bhoot World’, Bhoothnath is greeted with taunts and condemnation from other ghosts for bringing disrepute to the ghost-community for getting bullied by a kid on earth. Post the humiliation, Bhoothnath decides to redeem himself and come back to scare a bunch of kids.

Bhoothnath’s search for kids brings him to Akhrot [Parth Bhalerao], a slum kid, who is also the only person who can see him. Together, they agree to help each other and their friendship sees them get involved in a cause that is bigger than they had ever imagined. To move ahead, they lock horns with the powerful and corrupt politician, Bhau [Boman Irani]. The Lok Sabha elections are nearing and Bhau’s victory is a mere formality, or is it?

Nitesh Tiwari takes the BHOOTHNATH template and spins an altogether fresh tale in BHOOTHNATH RETURNS. The corrupt netas and the corroded political system have been an integral part of Bollywood for decades now. One is used to mortals trading charges against each other or manipulating the junta to suit themselves… Nitesh reinvents the genre by pitting a ghost against a political heavyweight and therein lies the difference. Everything else is fine-tuned to fit into the rhythm. The setting is a basti in Mumbai, but, frankly, the connect and identification is pan-India.

Nitesh also does away with the conventional romantic track, which is an essential part of Bollywood. However, the director compensates it with the camaraderie the kid shares with the friendly ghost, which amuses you no end. As a matter of fact, Nitesh has the knack of dealing with kids [recall CHILLAR PARTY, which he directed with Vikas Bahl], which is evident in BHOOTHNATH RETURNS as well.

While the first half is breezy, with several pleasurable moments and witty one-liners laced into the proceedings, the film does a U-turn in the post-interval portions. The goings-on, all of a sudden, turn serious, while the humor goes missing. As a matter of fact, the film veers into the Prakash Jha territory in the second hour, becoming a political drama, while the entertainment quotient is sidelined completely. The election process, the manipulative games played by the politicians, the fight for votes and power… the film changes tracks and gets preachy too. Sure, the message it conveys is well-intentioned and noble, but the serious and grim turn of events look out of place in view of the fact that the film has been promoted as a light entertainer eyeing the kids’ segment amongst moviegoers. Additionally, the pacing is uneven at times and the run time [2.30 hours] only dilutes the impact created by some terrific moments.

The soundtrack of BHOOTHNATH RETURNS is pleasant, not memorable. ‘Party To Banti Hai’ is the best track of the enterprise, while ‘Party With The Bhoothnath’ [featuring Big B and Yo Yo Honey Singh] comes *after* the end credits. It’s too late by then! Dialogue are witty at places and bring a smile on your face on varied occasions.

Although Bachchan Sr. has delivered unforgettable performances in his illustrious career, he never fails to surprise you with stellar acts again and again. He is the soul of BHOOTHNATH RETURNS, shining in several crucial sequences of the film. Boman Irani is fabulous as the power-hungry, shrewd politician, while Parth Bhalerao is the scene stealer, delivering a winning performance, despite sharing screen space with ace actors. The ensemble cast comprising Sanjay Mishra, Brijendra Kala, Usha Jadhav and Usha Nadkarni also deliver natural performances. Shah Rukh Khan and Ranbir Kapoor make cameo appearances, but they hardly leave any impact. Ditto for Anurag Kashyap.

On the whole, BHOOTHNATH RETURNS is made with noble intentions and the message it conveys resonates in the second hour, although those looking for entertainment may find it lacking in the second half. Watch it for some wonderful moments and superior performances by Bachchan Sr., Boman Irani and the child artist Parth Bhalerao.