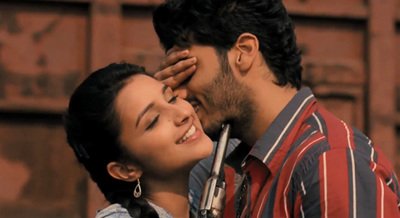 In a fictional small town in North India, battle lines are drawn between political families, the Chauhans and the Qureshis, sworn enemies, each seeking victory against the other in the forthcoming elections. Against this tense terrain, director Habib Faisal sets his Romeo & Juliet story, Ishaqzaade.

Arjun Kapoor is Parma, the loutish grandson of the Chauhan patriarch who gleefully loots local vendors and sets fire to their shops when they beg for a little compassion. Parineeti Chopra is Zoya, feisty daughter of the senior most Qureshi, who’d much rather have a gun over brand new gold earrings. Like most love stories in Hindi films, this one too starts off on the wrong foot, when Parma storms into the Qureshi estate to take off with the local nautch girl who is performing there. In the fight that breaks out, Parma pulls out his gun at an infuriated Zoya, who is determined to get revenge. She gets that opportunity on campus soon after, and predictably a romance between the two is on the cards.

The film’s first half coasts along nicely, culminating in a delicious, unpredictable twist. But as the film’s second half kicks in, it becomes clear the writers had no idea where to go with the story. Which is possibly why the love-struck couple spends the entire post-intermission portion just running.

Like in Do Dooni Chaar, director Habib Faisal’s last film, and in Band Baaja Baaraat, his breakout script, the real pleasure in Ishaqzaade lies in its colloquial language, believable characters, and lived-in locations. Faisal gives us a leading lady worth rooting for in Zoya, a firebrand who knows how to take charge. Parineeti Chopra breathes life into the part, emerging the biggest strength of this film. As Parma, meanwhile, that unlikely leading man with no moral compass, Arjun Kapoor is confident but at times awkward, and his rawness shows.

Much of the film’s strengths come undone by the use of such tired clichés as the religious differences that stand in the way of true love, and the sacrificial hooker with a heart of gold. Also Faisal resorts to an unforgivably unoriginal climax – for both the resolution of the lovers, and their families – that sticks out in a film with such promise.

Ishaqzaade benefits considerably from Amit Trivedi’s excellent soundtrack and Hemant Chaturvedi’s sharp cinematography. Faisal creates a believable world with charming characters, and his leads have crackling chemistry. I’m going with two-and-a-half out of five for director Habib Faisal’s Ishaqzaade. It’s far from perfect, but you won’t be bored.