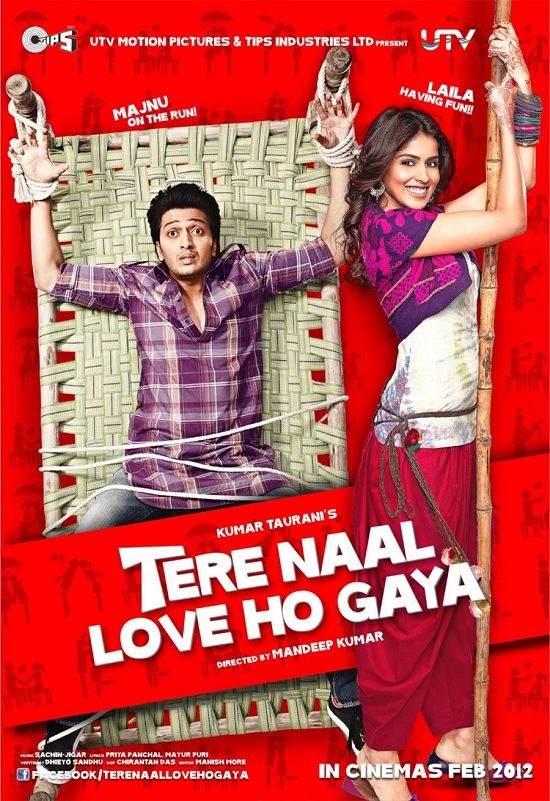 Follow three simple rules while attempting a rom-com…
One, the romance should be livewire. Ditto for the chemistry between the on-screen pair.
Two, the movie ought to make the viewer chuckle.
Three, it shouldn’t fall prey to predictability.
If you get the above-mentioned characteristics right, chances are you may be smiling from ear to ear on the decisive Friday. Okay, does TERE NAAL LOVE HO GAYA, directed by Mandeep Kumar, live up to the set standards? Oh yes, you do exit the auditorium with a smile on your face.

Love stories with real-life couples don’t spell magic at the turnstiles, opined an industry insider, to which my instant retort was if the film works, everything works. Actors, chemistry, songs, technical aspects et al are only as good as the film. After making their big screen debut with TUJHE MERI KASAM, Riteish and Genelia were paired in MASTI. TERE NAAL LOVE HO GAYA is the third film that teams the two talents. This one ought to be their best, right? Well, Riteish and Genelia look great together, no two opinions on that, and the real-life husband-wife team get ample opportunity to sparkle in their third outing. There are hiccups too — the film dips in the middle of the second hour — but, thankfully, it comes alive towards the pre-climax moments, which leads to a winning finale. The credit, to a large extent, goes to Riteish and Genelia for rising beyond a commonplace screenplay.

Bhatti [Tinnu Anand] is keen to get his daughter Mini [Genelia Deshmukh] married. He even chooses a guy who, he thinks, will keep his daughter happy thanks to his riches. In the meantime, Viren [Riteish Deshmukh] feels Bhatti has swindled him of his hard-earned money and confronts Bhatti in an intoxicated state. Seizing the opportunity of escaping from the situation [of marrying a guy she barely knows], Mini flees with Viren, making the episode look as if Viren has kidnapped Mini. Gradually, a romance develops between the unlikely couple.

I’ve frequently said that humor is serious business. Though the humor in TERE NAAL LOVE HO GAYA borders on illogicality, like AJAB PREM KI GHAZAB KAHANI, you can’t deny that it keeps you hooked nonetheless. Sure, there’re times when you feel that the humor is forced, but you don’t grudge and grumble since the intention to entertain and amuse the viewer endlessly are crystal clear from the very inception.

I’d like to add that TERE NAAL LOVE HO GAYA is not ‘inspired’ or ‘adapted’ from Danny Boyle’s A LIFE LESS ORDINARY, as being widely said. Following a graph of making an easy-on-your-senses film, the director reserves the best for the penultimate 25 odd minutes. Prior to that, the film vacillates between engrossing to passable to humdrum stuff. Agree, specifics are irrelevant in this case because the director or the writer isn’t aiming for realism or practicality here. This is a synthetic world, let’s not disregard this fact.

The one issue I hold against the writer is that the goings-on cannot maintain the energy consistently. I mean, the writer had the opportunity to make a real rib-tickling comic fare, but what appears on screen is only moderately amusing. You aren’t amused at every juvenile gag, nor do you submit to the insanity entirely. But, like I stated earlier, the concluding reels are dramatic and thoroughly enjoyable. Especially the final moments.

Sachin-Jigar’s musical score is pleasant. The songs are in tandem with the mood of the movie. It’s peppy and energetic, catering to a young audience. I’d like to make a special note of the cinematography [and the lush-green locales, of course], which is eye-catching.

TERE NAAL LOVE HO GAYA would’ve crumbled in the hands of lesser talent. Riteish is earnest, delivering a subdued performance. He underplays his beautifully, not going overboard one bit. Genelia is a livewire who adds to the insanity. She looks fresh, has a great comic timing and handles her part magnificently. Together, Riteish and Genelia elevate the film a few notches above the ordinary. Om Puri is remarkable, especially in the sequence when Genelia is asked to return to her father. Tinnu Anand is excellent. Smita Jaykar is wonderful. Veena Malik’s item number is strictly okay.

On the whole, TERE NAAL LOVE HO GAYA is refreshing and succeeds in its endeavor of amusing and entertaining, more particularly in its second hour. In addition, the sparkling performances by Riteish and Genelia is the mainstay of the film.