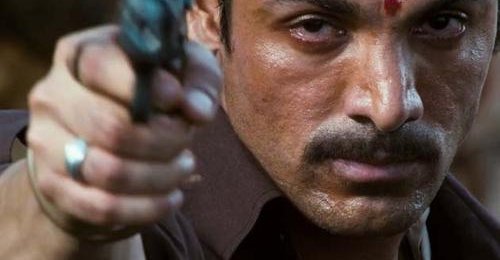 A gangster runs into a police station, both his arms lopped off by a rival wielding a butcher’s knife. Another goon is held down as his skull is pushed through an ice-crusher. A third, tied to a chair, is run over by a speeding car in reverse. The brutality is relentless in Sanjay Gupta’s Shootout at Wadala, a saga about the rise and fall of dreaded Mumbai gangster Manya Surve (John Abraham) in the 1970s, and his subsequent death in 1982 in what was reportedly the first police encounter.

Based on a chapter in S Hussain Zaidi’s book From Dongri To Dubai, the film nevertheless conveniently insists that it be viewed “as a hybrid between fact and fiction”. This means that while the story is rooted in Manya Surve’s journey from an innocent, bright college student to one of the city’s most powerful mafia dons, Shootout at Wadala is a pot pourri of stomach-churning slashing and shooting, writhing item girls, and lewd dialogue. In fact, Gupta infuses so much violence and sex into this tale that it hits the G-Spot – and by this, I mean, gratuitous. The director has no qualms pandering to the lowest common denominator; inserting item songs at will, peppering his actors’ lines with cusswords, filming bump-and-grind lovemaking sequences, and even throwing in a titillatingly-shot rape scene.

The film ostensibly follows Manya in a story as old as time itself – a boy is framed by the cops, he befriends a thug (Tusshar Kapoor) in prison, and escapes a hardened criminal. Manya decides to stand up to the Haksar dons, brothers Zubair (Manoj Bajpai) and Dilawar (Sonu Sood), and form his own gang. Meanwhile, the cops, led by the dedicated Aafaque Bagraan (Anil Kapoor) and his team (Ronit Roy and Mahesh Manjrekar), try to contain the gang wars by pitting one against the other. Manya’s biggest weakness is predictably his girl, college sweetheart Vidya (Kangana Ranaut), who is repelled by his line of work but can’t give him up for good.

While the songs are nothing to write home about, Shootout at Wadala has some trademark Gupta flourishes in the sepia-soaked camerawork, slow-mo action sequences and slick editing. The problem, unfortunately, is that there is barely any semblance of storytelling here. Scenes of visceral violence between the gangs are strung together, interrupted only by Milap Zaveri’s clap-trap lines. It all feels empty beyond a point because none of the characters are developed enough for you to care about them.

John Abraham pours everything he’s got into the author-backed role, using his eyes and his voice as much as his vein-popping physicality, in his effort to humanize Manya. Kangna, sobbing and nagging most of the time, reduces her character to a mawkish caricature. Anil Kapoor plays it straight as the cop on a mission, while Manoj Bajpayee and Sonu Sood get a few moments to make an impression.

Shootout at Wadala revels in its violence, yet sadly all the bloodshed leaves you unaffected and cold. I’m going with two out of five.