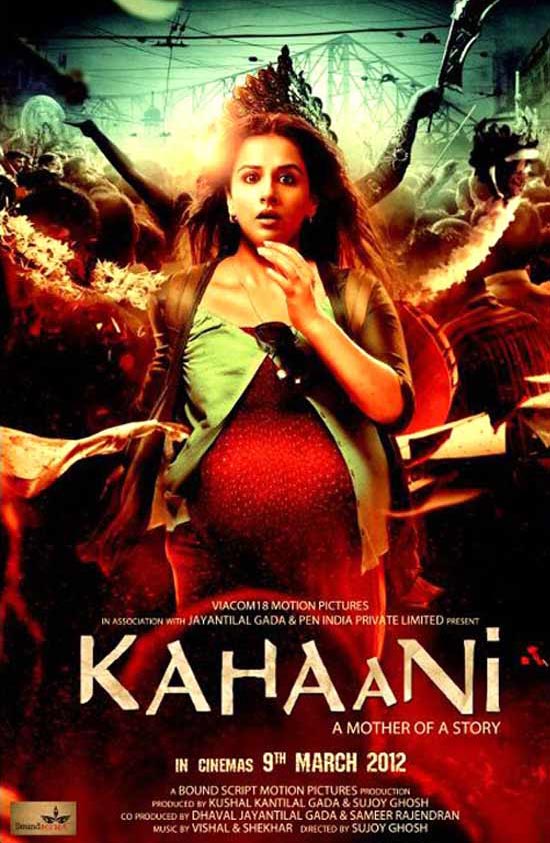 It is most risky thing to keep audience unaware of what the twists in the film will be. Come to think of it, suspenseful films are very difficult to make. One slight downer, and the whole project goes wrong. yes, one slight mistake and KAHAANI would’ve lost it in very beginning. But its a Thumbs Up to the screenplay and script writers who smartly trafficks the film with enough characters and plot that there is no time to think what will be presented in next few reels. Despite of so many characters the film manages to be convincing and unpredictable till the culmination.

The story revolves around Vidya Balan, but there are many characters right from beginning and each character is so well established and brought up in the story that you’ve no idea who is doing what! KAHAANI is amazing story! The film builts up the background where intense drama and thilling portions are brought in perfect blend. Thankfully, the director doesn’t puts his camera on dramatic woos, rather concentrates heavily on Thriller. Sujoy Ghosh is truly talented as a narrator and he does this film with sheer smartness.

The first half takes time to catch on, because its a heavy story and you know almost nothing about this story. But thankfully director doesn’t spoon-feeds us with flashbacks and stuff, rather he jumps directly in the story. The very first scene in the metro train is so stunningly made that you are engrossed about the film. Yes the film has its glitches in this hour as it is slow at times and unnecessary footage is given to the plot which involves Parambrata’s role having soft corner for Vidya Balan. Anyways, one of the best scenes of the film involves the one right at the intermission which shocks you like a mega watt.

But what happens in second half, is just spell-binding. The film carries the same route but this time the story gets more interesting and editing gets even more crispier. You need to be attentive towards the film otherwise you are missing something vital in the plot. The director does builts so much of expectations for the climax, that you’re are desperately waiting to see what actually is the case. And fortunately, climax is simply brilliant and the film ends up with a message, which actually doesn’t connect because you’re still to come out of the sheer twist at the end. What a second half!

The music is good. Shotti Bolchi in beginning and Ekla Cholo in middle both arrives on valid note. The cinematographer must be thanked by those who haven’t yet visited Kolkata. I am one of those and after watching the film I am very familiar with the atmosphere. The story settles well within the city. The editor deserves a special mention for a fabulous editing post-intermission.

Vidya Balan is stupendous as the central protagonist. She is just terrific in about every scene. Just note her kiddish portion with that tea stall kid or even with that kid in the hotel. Her anger, frustration, fun, audacity, everything is framed with flawless energy by Vidya! Every side character does very godo job, and yes I mean every damn side actor! The best ofcourse has to be Parambrata who gets enouh screen space.

KAHAANI is Sujoy Ghosh’s film all the way. Although Vidya does a remarkable job, but its Sujoy who brings everything right in place. KAHAANI does have everything going in its way, though few hiccups pre-intermission and the Parambrata-Vidya soft plot. But apart from that, KAHAANI is a film that keeps you thinking even aftre you come out of theater. The best part is, the director doesn’t leave anything unanswered when he is framing the confidential about the story. A very engaging ride.