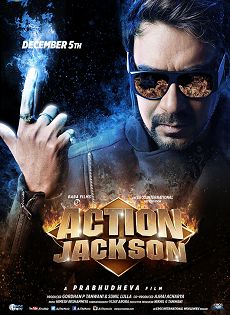 “Action Jackson” is like that of an uncooked crude platter of rice – you know its your staple food, but you just cant digest it. The film is so painfully bad that it disheartens to see someone like Ajay Devgn doing mundane action scenes, some of them have a musical background score only to haunt you that this film can go anywhere, and then comedy which even a kindergarten child will not laugh upon.

The film has a very easy template and the director’s work is awful. The way the scenes are shot and edited I only wish that the editor and the director takes a strong introspection lesson. Poor Sonakshi Sinha, who is in a self-destructing mode in her career, submits herself to the pedestrian culture of the film and we find her adjusting to unfunny and tasteless double meaning gags. I wouldn’t have mind them if they weren’t as clunked and overdone. Seriously, what were they making! “Action Jackson” is that kind of film where everything regarding the film is wrong.

The second half of the film is particularly trash- Manasvi playing a negative shade is so unintentionally that I wish the film was about her character. She is desperate, she is selfless for her man and she can only talk in seductive language even if you ask her to sing “Twinkle Twinkle little star”. The film is so dragged and boring that mercy is the only thing you ask for. In the wait of something magical to happen, “Action Jackson” tortures us for roughly 145 minutes.

The film has couple of humming songs and got nice tunes but there are as many as 7 of them and the way the songs are introduced, it looked like some piece of scenes between song albums. The action is disappointing to any degree because to be honest I have seen much more edgy and thrilling action in Amitabh Bachchan’s films when technology was not even in the periphery. The dialogue writers should be paid more money so that they can go and learn some dialogues. I mean come on – what do I have to react when the hero says – “Its my way or skyway”?

The film is a dud in every aspect. Ajay Devgn is uncomfortable like anything. You can easily pick out the scenes where he’s trying too hard. Its only Kunal Kapoor who delivers couple of genuinely funny scenes and mind you these are the only good scenes in this film.

To give Sajid Khan credit, I must say “Himmatwala” wasn’t really as unbearable as this film. Even “Humshakals” for once wasn’t atleast offensive. But “Action Jackson” is a real pain. It takes a leaf from films like “Rowdy Rathore” and “Ghajini”, both of which are one of the best entertainers in this genre in last decade, and still the film pales and how!

I thought I was declaring “Shaukeens” as worst of 2014. But “Action Jackson” takes the cake. The only reason to go and watch “Action Jackson” in theatre is if your own Air conditioner is not working and you desperately need to sleep.