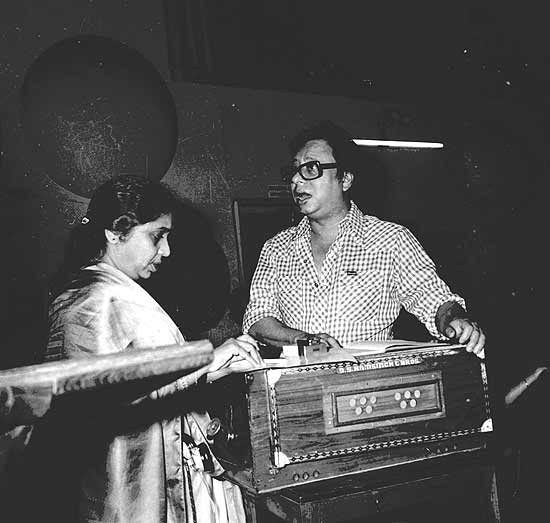 Film music is not just about the relationship between image and music. It’s about the ties between Indian culture, tradition, way of life and music. Music had always been a part of our lives. Waking up in the morning, you would hear the puja aarti…mother humming while doing household work. The milkman and the fakir would come singing. Music was there right from daybreak—in the temple’s bells and masjid’s azaan. The gurudwara’s paath used to start as early as 4 am. Even the ice-cream vendor’s call used to be sung: “Malai wali aayi”. “Le Hapur ke papad” was the song for selling papads. The sugarcane seller used to sing: “Ye ganderiyan jo ras ki bhari hain…” Our folk music caters to every occasion and tradition. There is a song for death, for wedding, for fasts, for rakhi, for holi. That music was used in our nautankis, and in Ramlila, where a harmonium player used to appear between scenes. In the plays of Aga Hashr Kashmiri, called the Shakespeare of India, every dramatic scene used to be followed by a ghazal. Marathi plays are filled with classical music. I have heard classical thumris there. Then cinema came, another form emerged and our music flowed into a new form.

When silent films began, there used to be a pit right in front of the screen in which musicians used to sit with their instruments. For Indian films, a harmonium player or the peti-master was most significant. When English films—or Tommy films—used to be screened there was the piano. A.R. Qureshi aka Allah Rakha Khan saab played tabla at a cinema hall for eight annas a show—a big amount those days. Then there were vendors inside, selling lemon soda, beedi, cigarettes. There was no silence in the hall, it was filled with noise. Those films may have been silent but our halls have become silent only now

On folk and film music

We have an immense wealth of folk music. But no one remembers their references in film music anymore. For instance, in Vishal’s Omkara the title song goes, Maathe par tirsul ke jaise teen teen bal padte hain, kaan pe joon renge to bhaiya raan bajaa chal badhte hain. This is Alha Udal, but you can’t caption or tell. The song is replete with folk imagery. If you tell someone today about raan, they’ll think it’s something to eat. They don’t know that wrestlers used to play the raan before a duel. You can’t explain these, for they are no longer central to our lives.

Western music was there because of the British. A very healthy trend of experimentation was influenced by one genius: Rabindranath Tagore. In Rabindrasangeet, he brought in a synthesis of the East and the West. It’s beautiful and simple, while retaining the basics of our ragas. Uday Shankar toured Europe and the US with his dance troupe and later Pandit Ravi Shankar followed in that tradition. Ravi Shankar took the symphonic design and married it with Indian patterns. The basic roots and ragas were improvised upon, not lost. Tchaikovsky’s symphonies were adapted by Salil Chowdhury. Suhana safar aur ye mausam haseen was a Polish marching tune. He was a genius who adapted orchestra and intricate designs of music. And A.R. Rahman is the first to take Indian film music and compositions to the West.

Poetry is not of one kind, the florid type…. Language has to change, or call it classic and lock it up in the attic.

Western musicals and the music in our films are very different. Their pattern of story-telling is that of the short-story, using concentrated narrative; ours is loose-structured, that of the epics. One aspect of The Sound of Music was about the children learning music. It was knitted through scenes which were musical. My Parichay was based on Rangeen Uttarain, which was a reverse of Sound of Music. It was about a house where music is banned. But there was fun in situations. If they can make a song on Do re mi, why can’t we have one on Sa re ga ma? I knitted music to situations, whereas The Sound of Music was a musical fully. Shirish Kunder’s Jaaneman was a beautiful attempt at tackling the western musical. Kunder treated even dramatic scenes musically. Hrishida made Biwi Aur Makaanin which characters talk musically. But our audience doesn’t want this kind of entertainment.

On film lyrics vs poetry

Take a song like Beedi jalaile. Look at the language of that girl in the entire film. She doesn’t talk without using a gaali. The whole climax starts with the smoke of the cigarette/beedi. In the song I’m narrating this whole story. One has to try a little to find meaning in songs. Poetry is not of one kind. Take Shailendra’s Mera joota hai Japani. I think its beautiful poetry. Or Dil ka haal sune dilwala…it’s great political comment. Poetry doesn’t have to be ab to inquilab laayenge, ab to sooraj nikla hai, aftaab laayenge. That’s not the only way to bring about revolution.

On changing language of lyrics

Zabaan to wahi rahegi jo aam logon ki bol-chal ki zabaan hai. Language has to change, otherwise you call it classic and keep it in the attic. If you go to the interiors, people speak such beautiful Hindi. But filmmakers are all from cities. They have no grounding in their own culture. Cinema hi se seekha, cinema hi mein pale aur cinema mein hi ghuste chale jaa rahe hain. It gets difficult to get even a beautiful line cleared from them. That’s why I work with only 2-3 well-known people. Vishal understands. Na lihaaf, na gilaaf, thandi hawa ke khilaaf…. He could take it but the actors asked me the meaning of gilaaf, lihaaf. If you use English meld it seamlessly, conversationally. Hinglish is a vulgarisation and has to be resisted.

On changes in music-making

The personal touch in making music is missing now. Just yesterday, Shreya Ghoshal was singing a song of mine with Rahman in Chennai; I was monitoring it in Bombay on Skype, so was producer-director Yash Chopra. It will be technically perfect. But in those days, when you used to sing together with an entire orchestra, there was an element of human sharing that is reduced now. A song used to get done in one sitting. Now it takes 10 days. There are greater inputs of cost and effort but technique has become perfect. It’s a peculiar contradiction. Just as in our lives. Diwali mein jo diye jalane ki feel hai wo bulb se chali gayi hai. How do you explain it? Kis tarah se lau dari dari si nikalti hai, hawa ke rukh se wo ladti hai aur tan ke khadi hoti hai ki ab jhonka koi aaya to dekhenge…

Rahman: Our songs had a form: Mukhda, antara, crossline, then it should rhyme with asthayi and then mukhada back again. Rahman broke this form and brought it to blank verse. I love working with him. I can also flow the thought without rhymes. Songs like Aye ajnabi, Satrangi re. Rhymes are there but we don’t know when they might come.

Vishal Bhardwaj: In light-hearted songs, Vishal has said significant things. There is social relevance. He doesn’t fit songs like items. His situations have social reference and consciousness. Salilda was like that. He composed Haal chaal theek thak hai…Vishal has Bandobast hai on ballot capturing, or after riots he composed Jaago jaago jaagte raho….

as told to Namrata Joshi. Listen to the full audio: