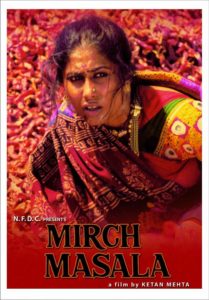 An officer of the alien government, a Subedar, assigned to collect taxes, arrives in the village. The moment the Subedar sets his eyes on the dusky Sonbai, he forgets all about taxes and lusts for her openly. Knowing that it is normal for a Subedar to expect gifts from a village, he shamelessly demands for Sonbai, and the spineless villagers, knowing that Sonbai’s husband is away, agree to oblige.

The movie is a art movie produced by NFDC and directed by Ketan Mehta. Naseer’s character and the music sometimes reminded of Gabbar’s character from Sholay though the treatment is not commercial. There are many excellent scenes like the scene where the school master is thrashed for saying that the Subedar might ask for Mukhi’s wife or the scenes of Abu Mian refusing to open the door. The final scene is the highlight of the movie.

Ketan Mehta’s direction is very good. The movie is still relevant and is a excellent movie on women rebelling against patriarchy.