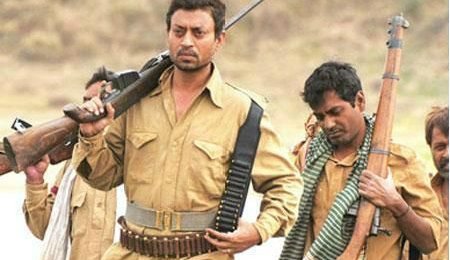 With his faultless performance as the famed athlete who turns into a feared dacoit in director Tigmanshu Dhulia’s Paan Singh Tomar, Irrfan Khan offers us a reminder of his blazing versatility.

Introduced to us as a reed-thin jawaan with an insatiable appetite for food, Tomar is quickly included in the army’s sports team, when he shows he can sprint across town to deliver a slab of ice-cream in four minutes flat before it begins to melt.

Having conquered the track with seven national wins in the most grueling athletic event, the steeplechase, Tomar has a promising career ahead that’s suddenly derailed when he must pick up a gun to protect his family’s honor, after an argument over a plot of land in his village gets messy. Tomar the sportsman transforms into Tomar the outlaw, and instead of the sports-field, his playing grounds are now the ravines of Chambal.

Narrated in flashback by Tomar himself to a nervous journalist (played by a superb Brijendra Kala), the life-story of this dreaded dacoit packs many a moving moment, and more humor than you’d imagined. There is surprising tenderness in his scenes with his wife (Mahie Gill), and sequences of joyful camaraderie between his band of thieves. There is regret too, as Tomar repeatedly reminds us – alas, few knew his name when he was a champion athlete, but he’s notorious now as an outlaw.

Directed competently by Dhulia, who’s familiar and comfortable even with the dusty terrain, Paan Singh Tomar is made with great attention to detail, and paints an honest, realistic picture of an India few of us can claim to know. Although repetitive occasionally and a tad long, the film raises two important questions: What could possibly drive a patriotic soldier into crossing over to the dark side? And although we call them sporting heroes, do we really care about our athletes once their careers are over?

I’m going with three-and-a-half out of five for director Tigmanshu Dhulia’s Paan Singh Tomar. Held up by a remarkable performance from Irrfan Khan, this is a well-intentioned film that’s worth your time.