Just Back from Kick : An Unintentional Parody of Dhoom 3 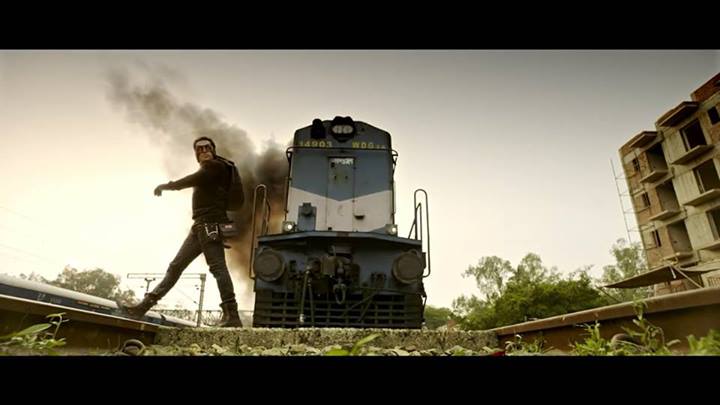 When the first promo of Kick had come, I had said that this looks more like a parody than a real serious film. Little did i know that its going to be true to this extent. I mean whats the purpose of making a movie like this? So Salman gets impressed by D3 and K3 (greats films to seek inspiration from, must say!) and decides to give his own tweak to those movies and creates an unintentional parody.

What else can you expect from an so-called actor who cant even emote in bare minimum serious scenes, fails miserably in drunkard scenes, uses animation for the stunts in his introduction scenes and has even lost his sense of humor? Everyone knows Salman was never a great actor but the level of incompetence he has achieved in this film is to be seen. I cant remember a film where his performance was this off key and irritating. He seems to be high on weed throughout the film.

The basic plot is the same as Dhoom 3. There is a flashback about Salman in the first half where he is introduced in a rickshaw kind of vehicle. Sajid Nadiadwala sure knows his target audience. The scene is so overlong and unfunny and refuses to finish. It makes the similar intro scene of Abhishek in Dhoom 3 seem better. Then there are stupid comedy scenes one after other with Salman in hello brother mode of overacting. To give him company were Mithun and a bunch of other sidekick ham actors.

In Dhoom 3, Aamir becomes a bank robber bcos his father commits suicide when the bank takes over his circus property on failure to pay the loan. In Kick, Salman becomes a robber bcos one fine day he found a girl who didn’t have money for operation and his inside Aatma (being human) Jazbaat takes over and he decided that he will loot the govt money (hard earned money of taxpayers) and will give in charity to disabled ppl. This is his “Kick” in life. The action scenes are of the chase kind and hand to hand. The hand to hand scenes are all close camera shot bcos Salman lacks agility and a wider angle will expose that fact like it has in all his previous films. There is a climax chase sequence where Salman is driving a double decker and it collides with a stack of gas cylinders and a blast happens which destroys everything nearby. But Salman ‘s “Kick” ka jalwa hi hai ki neither him nor the double decker has a single scratch on it. The scene where Randeep catches Salman on the flyover and he jumps into the sea is again exactly like the Dhoom 3 climax.

In the final scene, just as a reference to his earlier films, like the reference of Dabangg in many scenes of the film, they have the Wanted waala twist where they show Salman as a cop in the end. Now this made sense in Wanted bcos he was eventually killing the gangsters but it doesn’t make any sense in this film. Its just there so that the rickshawalla fans get excited and start clapping.

Acting wise, Salman Khan is totally bankrupt. The worst scenes are the two drunk scenes one with Mithun and other the with Randeep Hooda. Salman should learn from Aamir in RDB on how to portray a realistic drunkard. And he looks seriously fat in the film. That hangover song where he is wearing tight shirts and t-shirts, you can clearly see his paunch. Nawaz siddiqui has a small role and has hammed to the hilt. In one scene towards the end, he walks up to Salman swaying his gamcha, he was almost acting like a homosexual. Don’t know if that was intentional. jacqueline fernandez looks good , doesnt have much to do. was good in jumme raat song in that small dance track that she does. songs are all over the place and none of them are worth listening or watching.

Finally, i want to ask the makers, Salman Khan and also his fans – for how long are you going to endure this nonsense and willing to give this guy chances? He is going to do this again and again and again probably bcos he doesn’t know any better. Stop watching his films and let this guy get a reality check. I spent 300 rupees for this and I am not sure if i will choose it over a dvdscr the next time around.