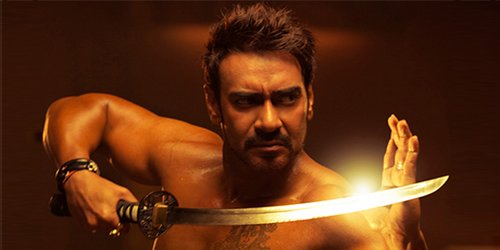 It takes a special kind of talent to make a film as awful as Action Jackson, so it should come as no surprise that it’s been directed by Prabhudheva, the man who inflicted on us all kinds of pain that we otherwise refer to as Rowdy Rathore andR… Rajkumar. Unlike those films, Action Jackson isn’t a ‘South remake’; it’s apparently an original script. And yet Prabhudheva whips up a similar cocktail of harebrained plot, exhausting action scenes, and crude sexist humor.

Ajay Devgan, who looks too disinterested to pull off this film’s idiotic requirements, is in a double role here, although the parts are barely distinguishable. He plays Vishy, a Mumbai goonda who can vanquish over a dozen rivals singlehandedly. He also plays AJ, a hitman-for-hire in Bangkok, who can slice and dice an army of enemies without breaking into a sweat. In the hands of a better filmmaker, this might have been an interesting device, but Prabhudeva plays it mostly for laughs. At one point, both men must switch places, which expectedly leads to humorous scenarios.

Sonakshi Sinha is cast as a presumably educated woman with a corporate job, who becomes obsessed with seeing Vishy naked because – believe it or not – she’s convinced it brings her good luck. Wait, it gets worse. Manasvi Mamgai is Marina, who, when we first see her, is about to be raped by the villain. Drugged and bound, she’s turned on by the sight of a shirtless AJ when he storms in to rescue her! There’s also Yami Gautam as AJ’s fiancée, who in one of the film’s most disturbing scenes, is repeatedly punched in the face by a hulking bad guy. All this in shocking close-up.

I’m going with a generous one out of five for Prabhudheva’s Action Jackson. It’s as much fun as getting your privates stuck in your zipper.