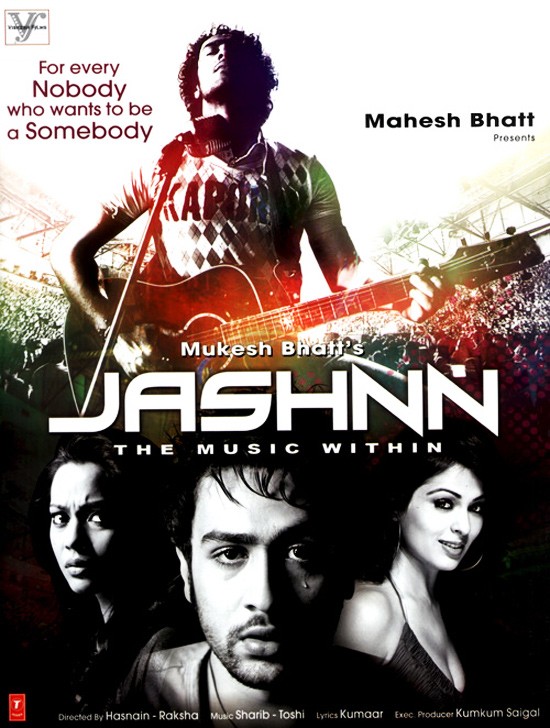 Akash Verma (Adhyayan Suman), a wannabe singer lives off his elder sister Nisha (Shahana Goswami), the mistress of a rich businessman Aman Bajaj (Humayun Saeed). He falls in love with Sara (Anjana Sukhani), Aman’s sister and this leads to some confrontations between Akash, Aman and Nisha. Akash leaves Nisha’s home to prove himself. The rest of the movie is about his trials and tribulations in trying to do that.

The movie has one of the worst screenplays ever and is filled with horrible scenes like the one where Aman makes Akash write ‘I am Sorry’ on a post it note and you wonder if he should have made him write that 100 times. The characters behave ridiculously and there is no logic. Sara’s friend just turns up with a gun asking Akash to leave her, Akash’s friends ask him to choose Sara or them when they just created a demo Cd thanks to her. Seeing the struggle the guy goes through you wonder if it is set in present times when you have so many singing shows on TV. He does get on a TV show in the end but why could his friends not try to get on a TV show before. The movie has such inane dialogues like ‘Zillat ki itni baarish huvi hai ke hum kuch dhul chuke hain’. The music is the only good thing in the movie and it’s sad that the songs have been wasted in a ridiculous movie like this.

Adhyayan Suman, who was ok in Raaz – The Mystery Continues, overacts in every scene and is hysteric most of the times. His dialogue delivery and body language are horrible and he can’t even walk properly. Anjana Sukhani overacts and looks old. She has so much make up on (even when she is selling all her stuff) and always has a horrible expression on her face (even when she is not speaking). Humayun Saeed, who resembles Parmeet Sethi a bit, is horrible. Shahana Goswami is the only decent actress in the movie but even she can’t resist overacting among this horrible actors. Every one in the cast is horrible.

The directors may have thought that they could make a movie on a singer and it would turn out to be a Rock On. They even have a scene where the band performs the song ‘Churaliye Hai’ at a graveyard ala the ‘Saanson Ki Zaroorat Hai’ song played at a wedding in Rock On. Raksha Mistry and Hasnain S Hyderabadwala who previously made such rip-offs as Killer (Collateral) and The Train (Derailed), rip off every cliché from bad 80s and 90s movies. There is nothing to celebrate here as the movie is just a torture.