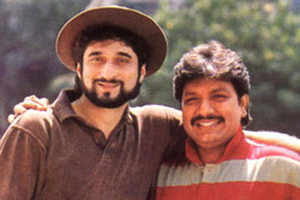 Nadeem-Shravan, who split in 2005 after composing music together for more than a decade, ruled the 90s with their music in films like “Aashiqui”, “Deewana”, “Pardes”, “Dhadkan” and “Raaz”.

“For the past few years I haven’t been active because of some personal reasons and also because I lost contact with some friends like Nadeem-Shravan. I miss them a lot,” Sameer said.

Nadeem-Shravan’s split came in soon after record executive Gulshan Kumar death. Nadeem was named a suspect in the murder but was later found not guilty.

Sameer, who won three Filmfare awards for his tracks ‘Nazar Ke Samne’, ‘Teri Umeed Tera Intezaar’ and ‘Ghungat Ki Aad Mein’, has been missing from the music world for quite a while.

“Sometimes the situation is not in your control. Time changes and with time you also have to change. I hope time changes again and era of 1990 returns,” he said.

Sameer also said his hopes are riding high on films ‘Housefull 2’, ‘Krrish 3’ and ‘Rowdy Rathore’, for which he has written songs.

“I hope these films bring me back in the limelight. I miss my father during these hard times. Today whatever I am is because of him,” he added.