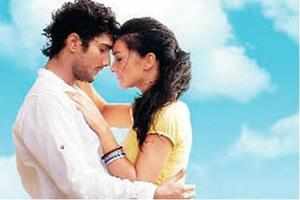 This love story gives you the option of two alternate endings to choose from. Irrespective of any standalone version that you choose, you still get the feeling of having watched multiple endings. That’s because, what starts as a lighthearted teenage romance matures into a long-drawn-out saga in the second half and every time you assume that the end credits would show up, the film extends itself for another few minutes. The version I watched, however, lived up to its ‘happy ending’ claim, for the audience were happy that the film ended.

Ekk Deewana Tha essentially endorses the love-at-first-sight cliche. Sachin (Prateik Babbar) falls head over heals for the girl-next-floor, Jesse (Amy Jackson). But he is a Hindu; she is a Christian and also a year elder to him. Her family doesn’t consent of their romance. But what starts as a cross-cultural love story seemingly on the lines of Ek Duje Ke Liye (1981) ventures into an altogether different zone. Jesse seems indecisive when it comes to choosing between love and family and the narrative keeps beating around the bush.

On the contrary, since the basic idea is about love-at-first-sight, no time is wasted in the first half on their preliminary bonding and the story comes straight to the point. The hero professes his love pretty early and the narrative proceeds at a good pace. Love-at-first-sight is primarily driven by physical beauty and the director pulls off the fact credibly by casting the gorgeous girl Amy Jackson as the female lead. Any average man would fall for her natural charm.

The film basically attempts to capture the innocence and insanity behind teenage first love. While it does that effectively to an extent in the initial reels, at the same time it glorifies adolescent romance as a heroic achievement. At the risk of sounding a moral police, it’s important to point that such blatant endorsement of love motivated purely on physical attraction could manipulate and mislead young minds. One could still have ignored the love-at-first-sight syndrome as an age-old Bollywood formula had the film been entertaining otherwise. Sadly the patchy second half disappoints even on that level.

The interval point where Jesse call offs her arranged marriage for Sachin makes you wonder if a family feud would follow in the second half. But all your apprehensions prove wrong as the family disapproval is kept on the backburner and what comes forth is Jesse’s personal dilemma. What seemed like a perfect romance goes for a toss with Jesse’s abrupt change of mind and like the hero, even the viewer, keeps asking what went wrong. However neither does her pain of separation with love register nor does her sacrifice for parents. And then the film keeps repeating itself with cyclic flashback shots every now and then.

Director Gautham Menon’s idea might have been to show how perception and priorities in life change, firstly as love takes over and subsequently when sanity strikes. But he’s only partially successful in making the point and loses the audience somewhere in between. With a film-inside-film setting, he also tries to tap the thought of how every heartbroken lover believes their love story is the epitome of tragedy and could be interpreted as a novel or a film. But even that doesn’t add depth or dimension to the narrative.

Much of the storytelling progresses through transitional songs but at times it becomes difficult to comprehend which is a dream sequence and which is a factual montage. Every time the graph falls, AR Rahman’s music is supposed to take over and add intensity. Though it’s not a hurdle-free love story, the treatment is more or less feel-good. The original Tamil ( Vinnaithaandi Varuvaayaa) and Telugu ( Ye Maaya Chesave) versions had a tragic end though an alternate happy ending is devised for the Hindi version perhaps assuming the national audience would be more pleased with triumph of love. Alas, over tragic or happy, a better ending was the need of the hour.

Prateik shows vast improvement from all his earlier acts but one still can’t say he has arrived. The volume added to his vocal chord helps but he seems uncomfortable while breaking into a jig, every once in a while. Amy Jackson looks ravishing. Often draped in saris, she carries off the Indian outfit gracefully but the extra tan added to her skin-tone seems splotchy and absolutely unnecessary. In terms of performance, she is confident and credible enough and never disappoints. Together Prateik and Amy bring refreshing chemistry to the love story. Manu Rishi continues his comic sidekick act pretty well.

The translation of Deewana can have different connotations from crazy to mad. Ekk Deewana Tha starts as a cool and crazy love story but by the end it could make you mad.