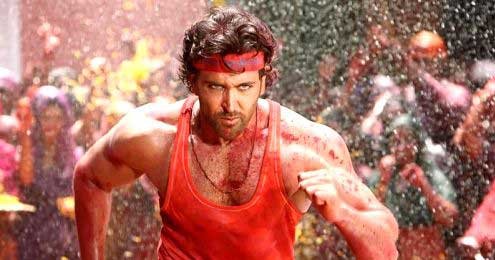 Debutant director Karan Malhotra’s re-telling of Mukul Anand’s 1990 vendetta movie Agneepath is a glossy, well-acted production. Compared to recent ‘mass entertainers’ that tend to lazily sacrifice story and plot for retro-style action and star appeal, this remake rolls along like a well-oiled machine. And yet, after watching three hours of stabbing, gunfire, blasts, and hand-to-hand fighting, you realize the film is somewhat crippled by its over-indulgent length.

Despite the almost 22-year gap, this new Agneepath retains the basic thread of its predecessor, and opens in the seaside village of Mandwa in 1977. The plot kicks in with the unjust killing of schoolteacher Dinanath Chauhan. His murder at the hands of sadistic villain Kancha, played menacingly by Sanjay Dutt, is witnessed by Dinanath’s young son Vijay, who grows up with an indefatigable thirst for revenge. As Vijay moves to Mumbai with his pregnant mother, played by Zarina Wahab, he aligns himself with Kancha’s rival – drug-don and pimp Rauf Lala, taken on in an unforgettable turn by Rishi Kapoor.

Fifteen years later, Hrithik Roshan is the grown-up Vijay, commander-in-chief to Lala’s empire. Estranged from his mother and teenaged sister because of the life of crime he chooses, Vijay lives in a Dongri chawl, and is the gunman with a good heart, who’s won the love of Kali, played by Priyanka Chopra, the motor-mouthed local girl who runs a Chinese beauty parlor in the neighborhood.

The film forges ahead, with high-voltage action scenes, chilling confrontations, double crossing, and gang wars. But Vijay moves with single-minded purpose, as if on a chessboard, working towards eliminating Kancha, who has transformed Mandwa into an isolated fortress for his cocaine production.

Now Agneepath is a throwback to those heightened action dramas of the 90s, so every dialogue is delivered as a punch-line; our hero may be battered and stabbed, yet he’ll rise like the phoenix, and the women are flung around to be raped or sold as sex slaves. As the noisy background score further testifies, subtlety is not an art here, but first-time director Malhotra handles the scale of this star-heavy, lavishly-mounted remake competently. He extracts strong performances not only from his leads, but also from supporting players like Chetan Pandit who plays Vijay’s upright father Dinanath, and Arish Bhiwandiwala whose eyes literally torch up the screen as the younger, angry Vijay.

However, the sometimes trite dialogues, and a few underdeveloped characters stick out like a sore thumb…take Om Puri playing upright cop Gaitonde, who pops up chiefly to deliver moral sermons to Vijay, or the frustratingly over-the-top Deven Bhojwani as Rauf Lala’s mentally-challenged son. Priyanka Chopra too gets a raw deal because her character is sketched as either hyper-comical or hyper-dramatic. To justify her part, the writers throw in more romantic scenes than needed, and these only further slacken the film’s pace. While the music by Atul-Ajay has its high points, the songs – yes, even Chikni Chameli – eat into the narrative, as over-choreographed as they are.

The film is enhanced by uncompromising, brutal action, and by its striking camerawork…especially those scenes framed against a monsoon sky, heavy with dark clouds. In fact, Sanjay Dutt’s entry in one such scene, his black-clad figure stomping across a bridge, stays with you. After watching him sleepwalk in film after film, it’s refreshing to see Dutt make this character his own – his sheer bulk adds to the overall evil of Kancha. He loses some of that sheen when he chants Sanskrit into an apocalyptic sky, yet his presence is freakishly powerful.

Rishi Kapoor too is deliciously despicable in his career’s most memorable negative role. He’s positively creepy when selling young girls in an open market, and has the commanding presence of a most-wanted criminal. His is the performance that returns to haunt you long after you’ve seen the film.

Amitabh Bachchan, who won a National Award for his performance in the earlier film, defined Vijay Dinanath Chauhan with a stylized performance, including a hoarse voice and a swagger. But it’s Hrithik Roshan who redefines this Agneepath. He plays the character without the flourish that Bachchan brought, turning him into a ruthless machine for revenge, yet shouldering layers of hurt, pain and rage that make you match step with him on his journey. He commands the camera once again and delivers a riveting, sincere performance.

I’m going with three out of five for director Karan Malhotra’s Agneepath. It is in the end, an old-fashioned revenge drama treated in that melodramatic, over-the-top style. You’re not likely to be bored by the intense action and the solid performances, but prepare to be exhausted by just how long this film plays on.