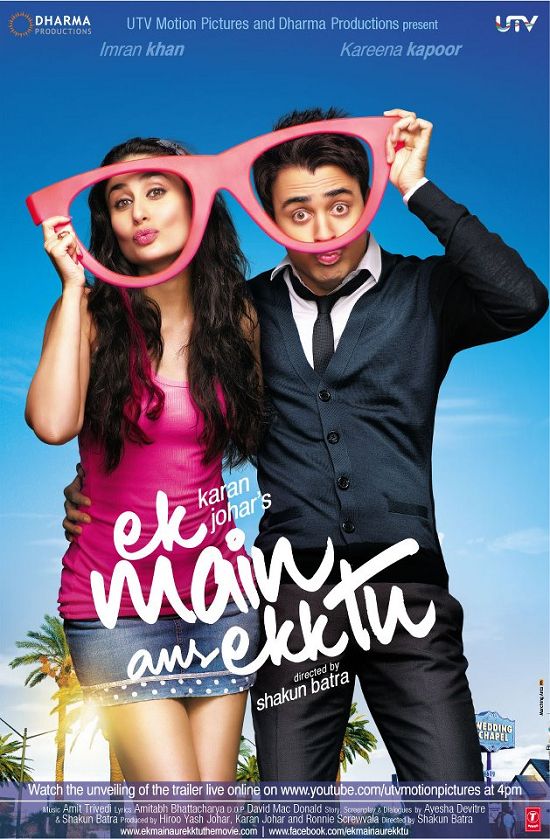 For those who swear by sentimental movies and are die-hard fans of rom-coms, who fervently wish Valentine’s Day is prolonged eternally, EK MAIN AUR EKK TU is akin to an answer to this yearning. Rom-coms relaxing in the splendor of harmonious compositions, a creative and innovative take on present-day romance, pulsating images and timed during the Valentine week… aah, you can’t ask for more!

It’s said that that good friendship, by and large, transforms into romance and consequently, marriage. But hold on… what if one marries by mistake? In EK MAIN AUR EKK TU, two responsible adults meet, get married in a jiffy [it’s a mistake, they realize the next morning], but this faux pas is the turning point in their lives. That’s the essence of EK MAIN AUR EKK TU.

The plotline of EK MAIN AUR EKK TU may bring back memories of WHAT HAPPENS IN VEGAS and the Mexican film RECIEN CAZADO, but EK MAIN AUR EKK TU is no adaptation of those films. Agree, the trailers might make you conclude it could be an imitation, but it’s not. EK MAIN AUR EKK TU is shades apart from the above named movies. Imagine a guy who has lived his entire life based on decisions taken by his parents. Come to think of it, he’s not living his life, but his parent’s expectations. And then comes a girl who opens his eyes and shows him what he’s missing out on. EK MAIN AUR EKK TU is more of a coming-of-age story, essentially.

Intrinsically, EK MAIN AUR EKK TU may be a rom-com, but it’s not anything that you may have witnessed on the Bollywood screen earlier. First-time director Shakun Batra brings with him a novel grammar of storytelling, which stresses more on tête-à-tête, while the camera captures those moments resplendently. Besides, Shakun doesn’t rely on buffers like heavy-duty drama, earsplitting background score or props to augment a scene or move the narrative frontward. In short, EK MAIN AUR EKK TU doesn’t take the conventional route. Neither is the plot humdrum, nor is the treatment unadventurous.

Rahul [Imran Khan] is on his way to become a replica of his parents [Boman Irani, Ratna Pathak Shah], when he suddenly loses his job as an architect in Vegas. Afraid that he has let his parents down, Rahul decides to hide the truth and find another job. When by a twist of fate, he meets Riana [Kareena Kapoor], a quick-witted hairstylist, who is everything he isn’t.

A series of events lead them to meet on Christmas Eve over a few drinks, but like always, it’s never a ‘few’. Following this night of debauchery, they wake up to discover that they’ve gotten married. Now, Rahul has more than just his job loss to hide from his parents. They both decide to get it annulled as soon as possible and get an appointment from the court in ten days. Over the next ten days they have their share of arguments, moments and laughs that results in an unlikely friendship.

Will this friendship turn in love? Will her warmth and fearlessness give Rahul the courage to face a long-simmering confrontation with his parents? Will a marriage that started as a drunken mistake help two people find themselves?

Set in an urban landscape [Las Vegas, Mumbai], EK MAIN AUR EKK TU is essentially a two-seater vehicle that excuses itself from the banal and hackneyed prescription, but endorses the longstanding theme of opposites magnetize. Shakun Batra gradients more towards the multiplex friendly technique of narrating a story and the execution of the subject reminds you of how rom-coms are narrated in the West. There are traces of Woody Allen’s style of telling a story, but in spirit, it’s akin to Imtiaz Ali’s greatly admired and lauded endeavor JAB WE MET. In fact, writers Ayesha Devitre and Shakun Batra ensure that this slice of urban life delivers its drama with least fuss, which is what makes it stand out in the crowd. Also, it doesn’t seem borrowed or a reproduction of anything witnessed before.

Director Shakun Batra familiarizes the spectator with the protagonists at the very inception and then wholly engages you in Imran and Kareena’s journey. While the first half encompasses numerous significant moments, the motion picture in actual fact takes off in the post-interval portions. The story shifts to Mumbai and that’s where the turnaround comes about. The entire episode at Kareena’s home, followed by the ‘Auntyji’ song, keep you amused, while the dramatic outburst at the dinner table is simply marvelous. The conclusion too is not what you think it would be and that’s why not just the director, but also the writers deserve brownie points for thinking out of the box. Without doubt, this is one of the most exceptional screenplays to come out of Bollywood in the recent past.

The soundtrack of EK MAIN AUR EKK TU suits the tastes of urbane listeners. While composer Amit Trivedi comes up with sprightly tracks like ‘Auntyji’ and the saccharine sweet title track, he also ensures that tracks like ‘Gubbare’ linger in your memory. EK MAIN AUR EKK TU sweeps you off your feet for one more reason: the stunning visuals [DoP: David Mac Donald]. The dazzling locales of Las Vegas are captured with aplomb on celluloid by the ace cinematographer.

Both Kareena and Imran come up with distinctive urban sensibilities and you only expect the two to comprehend the nuances of the narrative and execute that delicately and magnificently on screen. Kareena’s character in this film is very similar to the one she portrayed in JAB WE MET. In fact, you could say that Riana is the urban face of Geet, a free spirited, vivacious person. Kareena surrenders herself to the director’s visualization and delivers an outstanding performance, reminiscent of the one in JAB WE MET.

Imran fits into the role of a stickler for precision smoothly. In fact, you’d expect Imran to be overshadowed by Kareena completely, in view of the fact that Kareena is a far more experienced actor and also because her character is feisty and livewire, but Imran manages to stand on his feet and delivers a delightful, likeable performance yet again. The outburst at the dinner table only goes to provide evidence to the fact of how wonderful an actor he has evolved into.

The supporting cast comes up with impeccable performances. Boman Irani excels yet again. Ratna Pathak Shah is remarkable. Ram Kapoor is fantastic. Sonia Mehra is feisty in the cameo. The actor enacting the role of Kareena’s father is first-rate.

On the whole, EK MAIN AUR EKK TU is a slick, breezy and pleasant fare that should click with its target audience — the youth — and also has the potential to woo the older spectators as well. This take on love is refined, smart, lively and thoroughly pleasing thanks to its characters, conversations and the inherent humor. A perfect date movie. A film stuffed with exquisite moments that are sure to bring a wide smile on your face. Simply put, you cannot afford to miss EK MAIN AUR EKK TU. Just go for it!