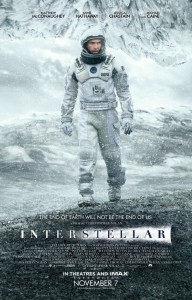 Official Synopsis
In the near future, Earth has been devastated by drought and famine, causing a scarcity in food and extreme changes in climate. When humanity is facing extinction, a mysterious rip in the space-time continuum is discovered, giving mankind the opportunity to widen its lifespan. A group of explorers must travel beyond our solar system in search of a planet that can sustain life. The crew of the Endurance are required to think bigger and go further than any human in history as they embark on an interstellar voyage into the unknown. Coop, the pilot of the Endurance, must decide between seeing his children again and the future of the human race.

Interstellar is somewhat similar to the movie Contact. Contact was also about someone putting up some wormhole through which the leading character travels. That movie also had a critical plot which involved a father and daughter.

As far as the flaws are concerned Ritz already mentioned most of them in a comment and I am just repeating the ones I agree with (in italics) and have added a few lines of my own (bold).

“Professor Brand uses a mechanical wheelchair when they have explored the solar system and have intelligent robots. Its just like Sam Worthington using a mechanical wheelchair in Avatar. Brand (Anne Hathaway) trying to collect some device/recorder from a broken spaceship when there is a Gigantic wave coming in sea is another WTF typical illogical character. Her not heeding instructions and causing trouble is just like Sandra Bullock’s character in Gravity not heeding instructions and causing trouble. Whole Matt Damon track is unnecessary. The planet Saturn looked like a picture taken from a book. In the movie none of the people who are on board that spaceship look qualified enough. Their talk and the way they talk about relativity, time travel etc is so stupid and juvenile. And they are explaining these things when they are already aboard the ship.

Cooper’s daughter discovers something in binary format – then writes the equations on the blackboard with a chalk, and then writes then down on the paper – and then throws the paper shouting “Eureka!!!”. Those scenes which are supposed to show her as super smart end up showing her more as a a dumb bimbo. The whole sequence on earth while Cooper is diving in the black-hole is ridiculous – just to create the backdrop. To create the backdrop of how on earth also there is an unrest while Mr Cooper is getting drowned in the blackhole – his daughter is shown setting the farm on fire, there is a fight / quarrel in brother and sister etc etc. All this looked forced and exaggerated and unnecessary. If Nolan wanted to show the unrest on earth , or – rather in his Daughter’s mind – he should have shown in a subtle way.”

Cooper is supposed to be one of the best pilots that NASA ever had and they don’t even bother looking or searching for him. When he comes to NASA they decide that they will just let him pilot this great mission all of a sudden. Murphy is mad at her father for leaving her and going on a NASA mission but grows up and starts working for NASA. Anne Hathaway wants to go to a planet because of wanting to follow her heart after just saying it has nothing to do with it. Even a potentially good scene where Murphy questions her dad if he left her for dying on earth is ruined by showing the scene twice. The movie is fully of corny dialogues.

The Visual effects are excellent for the most part and the movie deserved the Best Visual Effects Oscar that it got. Music by Hans Zimmer is excellent specially in some scenes like the scene where they go through the worm hole or the wave scene or the scene where Jessica Chastain tells it was all a sham or the final docking scene.

Matthew McConaughey was good as Cooper for the most part. Anne Hathaway’s character and her acting was quite annoying. Same with Matt Damon. Jessica Chastain was ok as Murphy. Mackenzie Foy was excellent as young Murphy. Bill Irwin was good as the voice of TARS. Michael Caine acted like he usually does in his usual role. John Lithgow was good as the grandfather. Casey Affleck was ok.

Interstellar aspires to be a great science fiction movie about wormholes, black hole and other science related stuff but it succeeds only in parts. It fails more often than it succeeds and when it fails it becomes a corny, cheesy movie.

Nolan should have avoided the cliched “world coming to an end” plot and all the mawkish silly stuff about saving humanity. It could just have been a movie about an astronaut going on a mission leaving his young daughter behind. The movie could still have had the “ghost” stuff. The movie should have ended with Cooper stuck in some other dimension unable to communicate with his daughter and thereby starting the loop of his travel. The Nolan of Memento would have probably done that but Nolan here tries to pander to everyone with a cheesy happy ending. Its a decent science fiction movie better than Gravity but it unfortunately is no masterpiece which it could have been.