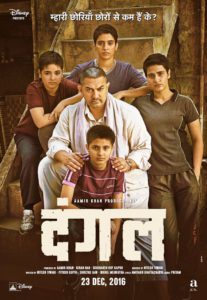 Its based on a true story but it takes a lot of liberties with the real life story specially in the 2nd half. The coach is portrayed as a villain. The coach and Mahavir Singh are shown to be training Geeta in opposite ways. Mahavir is shown as being locked in a room in the climax. Here is a link with some fact check on what was shown in the movie.

Aamir was excellent as Mahavir Singh Phogat. His putting on weight and looking old throughout the movie is commendable. The younger Aamir is there in only scene. Some people had commented that Aamir will play the younger part for a sizable chunk of the movie but its not the case here. I think Aamir deserved the National Award for Best Actor for this movie.

Sakshi Tanwar was good as the mother. Fatima Sana Shaikh was very good as Geeta. Sanya Malhotra was good as Babita. Zaira Wasim and Suhani Bhatnagar were excellent as the younger Phogat sisters.

Direction by Nitesh Tiwari is good except for the part where he tries to glorify Mahavir’s role since its played by Aamir. Dangal is very good and engrossing despite this flaw.