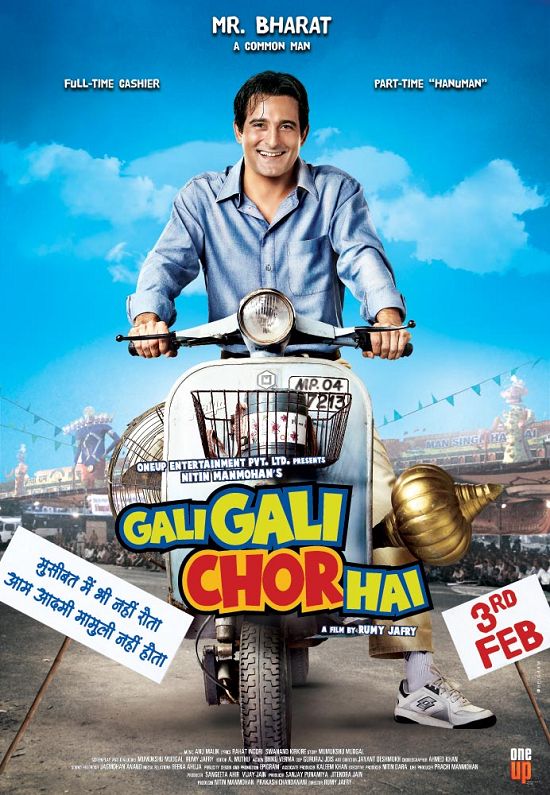 Films based on corruption isn’t a new thing served in Bollywood. In 2010, we had Akshay Kumar’s “Khatta Meetha” which was a comic drama which was based on corruption faced by a common man. This year we have Rumy Jaffry’s “Gali Gali Chor Hai” a comic satire on corruption faced by a common man. It’s a film that has its heart in the right place. Its very vital for a director to know in which way the film has to be made. Even here, the film could have been brought up in serious and intense atmosphere, but the director chooses the rather way and serves us the film with comic flavor. Here is where, the film strikes chord. Come to think of it, it is not easy to catch the eyeballs for serious issues and its not easy for any maker to keep audience hooked in a dark, intense premise of film.

GALI GALI CHOR HAI is set in Bhopal and the director uses the specialties of this place and puts the film very well in its atmosphere. The director ensures that the pace never takes a halt and thus it helps to be within the wheel of the film. The director adds a funny plot where protagonist’s wife doubts her husband of having extra marital affair. This plot doesn’t rise serious as it is set just to bring the smiles and laughs and the director succeeds in bringing them. The plot may seem very notorious for a film set on corruption, but the director finds a way to bring comedy and drama under one roof.

Both halves of the film are kept balanced and gives us seldom chance to complaint. Ofcourse, the director should’ve done away with songs like the romantic song in between or the item number of Veena Mallik. Just as every film has its flaw, even this film has to tolerate it. Also the sharp editing helps the film to remain in tone and thus the film ends as staggeringly entertaining one. Yes, but the film should have had a more staunch end like it should have some powerful dialogues and a very hitting monologue from our protagonist. But, here the film ends quite in a simple end which seems like a tame end.

All said and done, despite it has some silly setbacks, it still is an imaginable and very well executed film. Rumy Jaffry scores extra points for his direction and he ensures that his ensemble cast does a very good job. The music is not good except the title track by Kailash Kher. The film is penned in a smart way and it’s a thumbs up to the script as well as screenplay writers. Rumy Jaffry’s direction gets extremely enhanced because of a terrific script and screenplay. It’s a great work by this off-screen team. Bhopal is very well captured and helps for the real feel.

Akshaye Khanna once again embarks with an stupendous performance. Pick any of his scene, and his natural act will definitely dwell on you. Both, Shriya Saran and Mugdha Godse does very good acting. Satish Kaushik does a wonderful job. He excels in last 15 minutes. Annu Kapoor deserves special mention for his acting, and more importantly for his entry scene. Rest all does well and supports the film.

It’s a very unique and engaging comic-satire which deserves a watch. Everyone associated with the film has done very honest work which reflects in the product. What makes the film more engaging are the inherent characters and sensible execution of the topic.