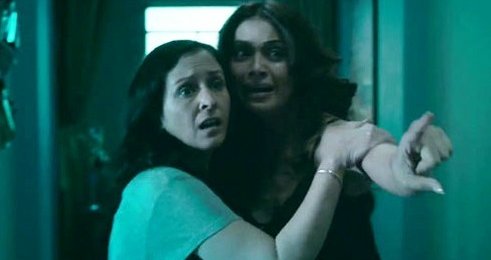 95 minutes have seldom felt so long, as they do while watching Aatma. This curious but ultimately predictable supernatural thriller fails to escape genre conventions, falling into the same trap that so many of its predecessors have.

Bipasha Basu is a single mother struggling to protect her daughter (Doyel Dhawan) from the otherworldly grasp of her dead ex-husband (Nawazuddin Siddiqui), who wants to take the little girl away with him. It’s an intriguing premise, ripe with emotional potential, but writer-director Suparn Verma sticks to tried-and-tested gimmicks, never offering an original suspenseful experience.

Low on scares and unfolding at a snail-like pace, Aatma recycles familiar horror-movie imagery to little impact. In one relatively chilling scene that’s unfortunately given away in the trailer, a terrified Bipasha is confronted with the sight of her daughter walking the balcony ledge, as Nawazuddin’s spirit beckons her to jump.

Moments like these are few and far between in this lazy film that doesn’t even create the required atmospherics for a moody thriller. The resolution is underwhelming, a handful of fine supporting actors (Jaideep Ahlawat, Shernaz Patel, Tillotama Shome, Shiv Subramaniam, Darshan Jariwala) are wasted, and in the end you’re struck by the sheer futility of the enterprise.

I’m going with one-and-a-half out of five for Aatma. This is death by boredom!