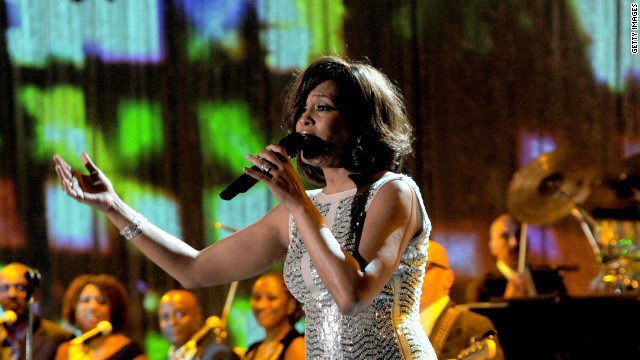 The entertainer was pronounced dead at 3:55 p.m. (6:55 p.m. ET) at the Beverly Hilton Hotel despite resuscitation efforts, a police spokesman said

Beverly Hills Police Lt. Mark Rosen said there were “no obvious signs of criminal intent” and that the cause of her death is being investigated.

Houston died on the eve of the 54th annual Grammy Awards in Los Angeles.

According to her official website, Houston, who struggled with addiction problems over the years, sold more than 170 million albums, singles and videos over her career.

Houston was set to appear in this year’s “Sparkle,” a remake of the 1976 hit, which was loosely based on the story of The Supremes. It was her first movie role since 1996’s “The Preacher’s Wife.”

News of her death elicited a flood of reaction on social media, from fans and fellow celebrities alike.
Whitney Houston seemed ‘in good spirits’

Music producer Russell Simmons wrote he was “deeply saddened by the death of Whitney Houston,” while singer Gloria Estefan said she was “shocked we’ve lost the immensely talented” entertainer.

Another music legend, Quincy Jones, said he was “absolutely heartbroken” by the news. “She was a true original and a talent beyond compare,” he said.

Houston’s body of work includes seven straight Billboard No. 1 hits in the 1980s, including “Saving All My Love for You,” “How Will I Know,” “Greatest Love of All” and “Where Do Broken Hearts Go.”

Billboard put her soundtrack to the movie “The Bodyguard” as one of the top 10 biggest-selling albums of all time. She also starred in the film.

The daughter of singer Cissy Houston, Whitney was born on August 9, 1963, in Newark, New Jersey. Famed music producer Clive Davis reportedly spotted Houston 20 years later in a New York nightclub, signing her on the spot, according to her website.

The singer’s rendition of the national anthem at the 1991 Super Bowl, days into the first Persian Gulf War, earned raves and cemented her place in the American musical landscape.

After “The Bodyguard,” Houston went on to appear in several more films in the 1990s, including “Waiting to Exhale.”

In 2000, Houston earned her sixth Grammy for best female R&B performance and, a month later, she was named female artist of the decade at the “Soul Train” Music Awards.

Her career stalled, however, in subsequent years as she entered rehab for addiction problems.

In May 2011, Houston got help for her much-publicized struggle with drugs and alcohol, her representative said at the time.

In a 2009 interview with Oprah Winfrey, Houston recalled how her mother arrived one day at her doorstep at her daughter’s house with sheriff’s officers and a court order in a drug intervention. She talked about doing cocaine and smoking marijuana.

“(My mother) says, ‘I have a court (injunction) here,” Houston said. “Either you do it my way, or we’re just not going to do this at all. We are both going to go on TV, and you’re going to retire.'”

Houston had a high-profile and tumultuous marriage to Bobby Brown, a former “New Edition” star who has had multiple brushes with the law. The couple appeared together in the mid-2000s on the reality show “Being Bobby Brown.”

Davis steered Houston’s career for more than 25 years, also serving as a mentor.