Sanket’s Review: “Talaash” is not entirely engaging, though its fairly good! 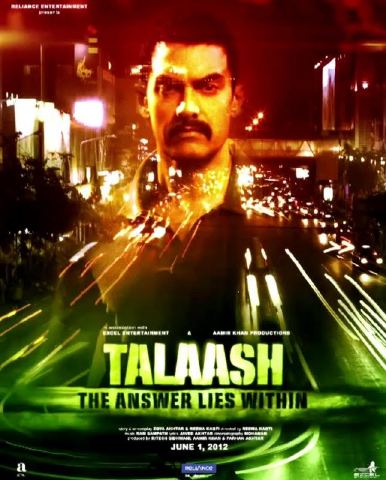 TALAASH, this week’s new thriller has lots of surprises in store, but they are not well unfolded. The genre of the film itself is a big surprise. It’s really impressive to see so many mainstream faces doing such kind of suspense drama which takes a path away from our regular suspense thrillers. From prostitute areas to high profiled people to small time gangsters, TALAASH revolves around many characters and each is well defined.

The investigation process has a solid pace and TALAASH races very speedily for first 40 minutes or so. But after a point, too many plots lands up in the film and many seem irrelevant to the basic plot. But, TALAASH doesn’t entirely lose up. It has its high moments. The emotional connection between Aamir Khan and Rani Mukherjee is smartly handled and has a meaning which you come to know once the film is ended with its major twist!

Second half has again many edge-off-the-seats moments like that excellent chase sequence on railway station to the construction building. But the major clutch remains in its conviction factor. The twist doesn’t really match up to the expectations, as its bit bizarre.

Music is good. All songs are in background and all takes the narration ahead. Cinematography is stupendous! Kudos! The dialogues at times are clapworthy, especially those mouthed by Aamir Khan, but at another end there are also few corny lines! The script and screenplay is well penned, but Kagti somewhere gets stuck in direction.

But if at all TALAASH comes up from its dicey pace, then its because of the actors. Aamir Khan yet again delivers outstanding performance as the confused investigator. He doesn’t miss a single beat! Just brilliant! Kareena Kapoor springs a surprising act. She manages to rise above the saddled character that she portrays. Rani Mukherjee pleases with her emotional connect. Good to see such wonderful actress doing a role which has powerful substance! Nawazuddin Siddiqui understands his part well, although we have seen better of him in his earlier films. Rest every character, yes; every character does a good job!

TALAASH isn’t entirely engaging, but its fairly good watch for its thrilling moments and amazing acts from one and all. The film could have been tad better and should have been edited by at-least 15 minutes to make it more efficient! Go for it, you might just enjoy!