Sanket’s Review: “Matru Ki Bijlee Ka Mandola” suffers from its over-ambitious director, though is saved by the performers. 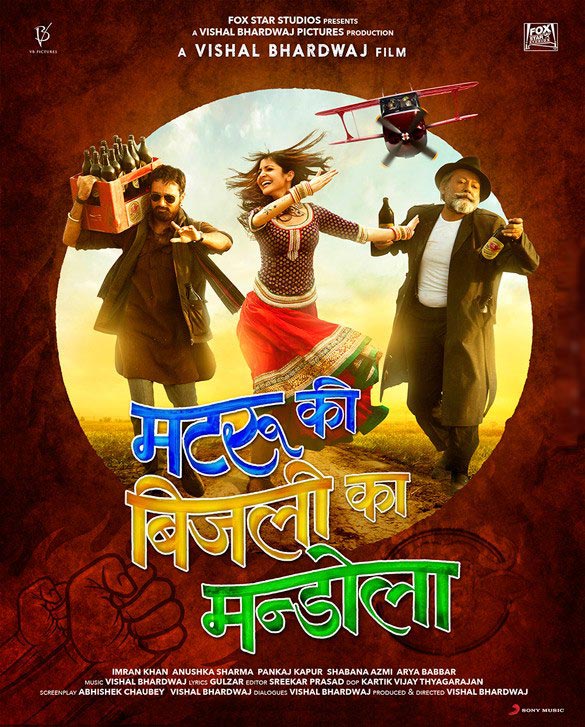 Vishal Bhardwaj is known for making “out of the box” type of cinema. He has given us some gripping tales in past like “Omkara”, “Maqbool”, “Kaminey”, but sadly it seems the director is losing his hold over his films which reflected in “7 Khoon Maaf” and now “Matru Ki Bijlee Ka Mandola”. Bhardwaj infuses so much of smart narration that it sidelines a well written script. What queers me is that he attempted pronounced humor in his film making a caricature out of Arya Babbar! Who would have thought of slapstick gags in a film directed by Bhardwaj!

The first half of the film has some ace and the story unfolds smartly. But the film focuses too much on trivial things adding to its overlong length. The last 15 minutes before inter-mission is the best thing about the film and will surely bring the house down with enormous laughs! But sadly, this is the only memorable bit of the film, and may be the only scene where Bhardwaj strikes chord with his direction.

The film loses its momentum post-intermission where too many songs eats up the story. In-fact, the film delves in conventional zone too easily and the film only drowns. The whole climax is disappointing because it doesn’t make up for all the lapses, in addition it adds one! The whole “Gulabi bhains” portion which was highlight of the promos becomes nothing but just a half-baked plot.

The music score is fine with two energetic numbers- “O boy O boy Charlie” and the “Title track”. The dialogues are humorous aplenty times and also connect with the rhythm of the film. The story and screenplay is too simple though smart at times, especially in first half. But sadly the film suffers from its over-ambitious director, though performances save the film. The songs which are added in every important situation of the film cringes you and it is a sign of banality, to be really honest! Bhardwaj surely can do much more than just this.

That brings me to the performers- Pankaj Kapoor springs life in the film. He has remarkable energy and he carries his role with aplomb. Imran Khan meanwhile does justice to his job. He together with Pankaj Kapoor lit the screen and those 15 minutes just before the interval will tell you all. Anushka Sharma is saddled with unimportant role although she sparks in few of the scenes like the climax one. Shabana Azmi is first-rate, while Arya Babbar is still to learn acting.

“Matru ki Bijlee Ka Mandola” is watchable a film, but it disappoints because of the names associated with the film. Bhardwaj surely should be thankful to the performers that they saved this film from being complete disaster. Strictly average! Lower down your expectations and you may come out less disappointed.