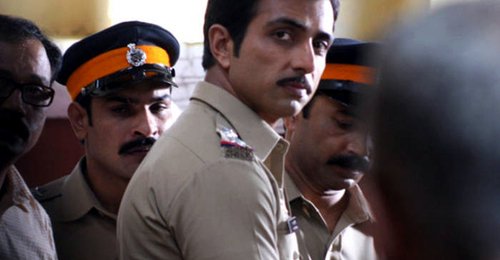 A thriller about the power struggles within the Mumbai police force and the repercussions of such cops-versus-cops clashes,Maximum, directed by Kabeer Kaushik is an interesting idea that sadly doesn’t translate into a coherent film.

Opening in 2003 when the police had more or less weeded out underworld elements from the city, the film recounts the rivalry between two encounter cops, incited by the manipulations of corrupt politicians, greedy businessman, and dons forced to operate from overseas. Sonu Sood stars as Pratap Pandit, an expert sharpshooter and pride of the force, whose authority is challenged by disgruntled senior officer Inamdar, played by Naseeruddin Shah, who Pandit once reported to.

The film is a blur of plans being hatched, accomplices switching sides, and information being compromised. But it’s hard to stay awake when it’s all unfolding so slowly… Many bullets are showered in the film’s climatic confrontation at a railway bridge, but by then you’re counting down to the end credits.

Kabeer Kaushik, whose taut debut Sehar remains one of the most memorable cop films in recent years, appears caught up trying to make everyone and everything look very ‘serious’ in this film. As a result, it’s all too grim and dull, and we don’t even get characters worth caring for.

I’m going with one-and-a-half out of five for Kabeer Kaushik’s Maximum. Only Sonu Sood performs earnestly, but he’s let down by a humorless script. He deserved better. So did we.