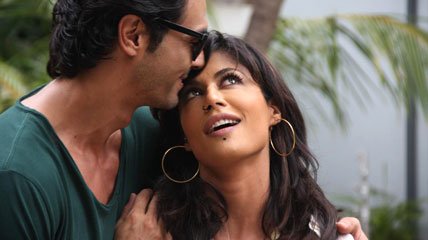 It’s ironic that director Sudhir Mishra’s Inkaar hinges on the premise of sexual harassment and desire in the workplace, because this is a film that could leave you deeply frustrated.

In the movie, an advertising agency CEO, Rahul (Arjun Rampal), is accused of inappropriate sexual conduct by its creative head Maya (Chitrangada Singh). This is an delicate theme and Mishra takes on prickly subjects like casual flirting, female ambition, blurred boundaries, and sleeping one’s way to the top. However, somewhere in the film’s uneven storytelling, cardboard characters, and cop-out of an ending, the potential for a good sexual thriller is squandered.

That’s a pity because Inkaar sets up its drama interestingly, opening with an outside investigator and social worker (played convincingly by Deepti Naval) showing up at the agency to conduct a closed-door probe into the nature of the complaints leveled against Rahul by Maya. Key co-workers sit in on the investigation and help with their opinions and versions of what transpired in the seven years that Maya and Rahul have worked together, even as the accuser and the accused give their sides of the story.

As the narratives overlap, the story of the complicated professional and personal relationship between Rahul and Maya unfolds in flashbacks. Soon after he helps her land a job at his agency, Rahul plays mentor to Maya and moulds her, much in the way Henry Higgins shaped Eliza Dolittle in Pygmalion… “I introduced her to Chanel No: 5,” he claims; “she used to call it Channel.” This stereotypical depiction comes straight out of the Madhur Bhandarkar school of simplification, and the casualty here is the advertising industry where employees get drunk out of their senses, jump into swimming pools, sell ham-headed campaigns to clueless clients, and goof around in office. There isn’t a smidgeon of professional behavior here, as is evident in that one scene where the HR head of the agency is asked for his opinion on this high-profile case and he’s too busy fiddling on his mobile phone to reply.

Predictably, it turns out that Rahul and Maya did have an affair, but one that turned sour when she rose up the ladder and was promoted to the board of directors in the company. It’s a tired story – Maya says Rahul harassed her sexually, while Rahul claims Maya used him on her climb to the top. Your sympathies lie with Deepti Naval as she sifts through the truth in those deliberations that go on and on and on. These are the longest two days you’ll ever sit through, and what makes it uncomfortable are the annoying camera angles. It isn’t enough that the lens caresses Chitrangada’s lips or lingers over Arjun’s bespectacled eyes, but we’re even treated to jarring close-ups of lesser attractive actors’ faces and flaring nostrils.

The trouble with Inkaar is that even if it does have a bunch of interesting ideas, they’re lost in a muddled drama. There are some bizarre scenes, like when the board of directors walks around grimly at an office party right after promoting Maya, or as she fantasizes about a campaign just when her boss is yelling his lungs out at her. The film suffers from pretentious touches too, like a clumsy portion with Rahul’s father who, let’s just say, has an unconventional approach to parenting. Maya’s mother, holed up in Simla, is another caricature who whispers in her daughter’s ear as she hands over a bottle of homemade achaar: “He isn’t the marrying kind”, referring to Rahul.

The performances are of the skim-on-the-surface variety. Arjun and Chitrangada look like a dream and valiantly tackle difficult roles, but you get the idea that they’ve bitten off more than they can chew. Despite the bold, controversial theme, Inkaar fizzles out once the fireworks fade, not least because of its awkward climax in the office restroom, of all places!

I’m going with two out of five for Sudhir Mishra’s Inkaar. This is a half watchable film despite all that melodrama flying around. Sadly, if it had kept its head, this thriller could have gone places.