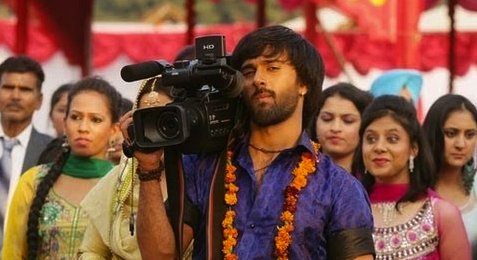 It’s hard to say for sure if it’s his rakish charm or the lure of that video camera he wields that has the townsfolk seduced in Bittoo Boss. A mini hero of sorts in his native Anandpur, no wedding is complete without his presence. Each time he swaggers into a shaadi, often hours late, he raises the spirits of tired relatives and spreads cheer when he points his camera in their direction, promising to take a “sesky shot”. Bittoo (played by Pulkit Samrat) is no ordinary wedding videographer. As the film’s nicely done opening sequences establish, he doesn’t just shoot weddings…he creates memories.

It’s unfortunate that the same surefootedness that debutant director Supavitra Babul shows in setting up the narrative, disintegrates into a trite, preachy affair in the second half. The tone shifts when the plot twist is introduced – humiliated by the girl he likes (Amita Pathak) for his simple ambitions and modest means, Bittoo takes the drastic decision to shoot pornographic videos to earn big bucks; he arrives in Shimla to secretly film honeymooning couples in hotel rooms.

I’d be giving away too much if I went into how this film ditches the quirky potential of its premise, and instead goes down a silly, sanctimonious path. It all comes undone when Bittoo, messiah-like, “rescues” the very couples whose privacy he’s meant to invade: first, an under-age pair of students, then an awkward simpleton and his bindaas wife.

Bittoo Boss is an enjoyable enough ride until it goes off-track. Of the cast, it’s Ashok Pathak in the role of scrawny Shimla cab-driver Bikki who steals the film with his manic energy. Pulkit Samrat gives a confident turn as Bittoo, despite the Ranvir Singh-Band Baaja Baarat hangover that you can’t shake off. Samrat balances the character’s vulnerability and cockiness competently.

I’m going with two-and-a-half out of five for Bittoo Boss. The film tosses around some interesting ideas, but can’t seem to make them work as a perfect whole.