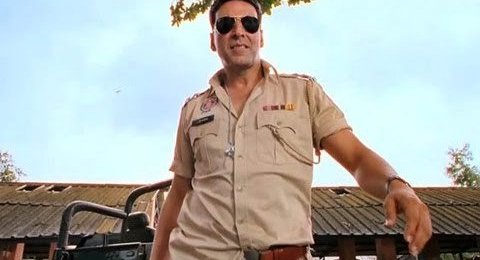 Khiladi 786 stars Akshay Kumar, who breaks into a Himesh-voiced song at the drop of a hat. Normally that wouldn’t be a problem, except that Himesh Reshammiya himself appears in this film. Which means you have two people on screen with the same voice – Himesh Reshammiya’s voice. Creepy, positively creepy.

The nasal-voiced crooner who’s credited as Actor, Singer, Music Composer, Story Writer, and Co-Producer of this film, allows Akshay to take centrestage as a fake cop from Punjab named Bahattar Singh, who desperately wants to be married. Bahattar, along with his father and uncle, Sattar and Ikhattar (Raj Babbar and Mukesh Rishi), masquerades as a cop and nabs smugglers on the Punjab border. For this reason his family has remained disreputable for years, and a good Indian wife is hard to come by.

Enter Himesh Reshammiya as Mansukh, the incompetent son of a Gujarati match-maker, who vows to find a suitable bride for Bahattar, unaware that he’s no real cop. His search ends at the home of local don Tatya Tukaram Tendulkar (Mithun Chakraborty), who’s looking for a respectable groom for his sister Indu (Asin).

Directed by first-timer Ashish Mohan, an erstwhile assistant of Rohit Shetty, Khiladi 786 is funny, but only in spurts. For the most part, it’s as enjoyable as watching a kitten struggle to shake off the firecracker that some mean kid tied to its tail. If you laugh, they’re probably guilty laughs – how can you be amused by such cruelty?

At the receiving end of writer Himesh Reshammiya and director Ashish Mohan’s tasteless sense of humor are dwarves, handicapped people, and particularly foreigners who’re reduced to embarrassing racial stereotypes. Bahattar’s grandmum, or beeji as she’s affectionately referred to, is a big, fat African woman – which explains why his father and uncle sport Afros and glued-on sideburns. His mother is Canadian, his aunt Chinese. These women exist in the film only to have jokes directed at them and to dance awkwardly in the big family numbers.

A key subplot in this film involves Indu’s boyfriend, an unfortunate fellow (Rahul Singh) who is repeatedly jailed for some unintentional crime he commits each time he steps out of prison gates. It’s the kind of juvenile humor that might appeal to those below the age of eight. The film, then, rests squarely on the shoulders of its leading man, Akshay Kumar, who redeems it to some degree with his manic energy, his endearing but bovine grin, and his skill at delivering clever one-liners like he’s just come up with them. The action is all routine stuff – nothing you haven’t seen in Rowdy Rathore or Rohit Shetty’s Golmaal movies – but Akshay’s had enough practice pulling it off with flair.

Khiladi 786, with its pedestrian humor, inane plot, and hammy performances, begs the question: haven’t we had enough? How many more times will charismatic actors help stupid films get made?

I’m going with a generous two out of five for Khiladi 786. Akshay Kumar fans may not complain. The rest might prefer the company of an Asprin.