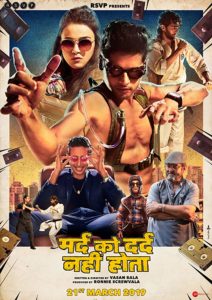 It is a story of a young boy Surya who has a rare condition of Congenital Insensitivity to pain meaning he can not feel pain, and he sets out to learn martial arts and hunt down muggers.

The movie starts off with the childhood of Surya and Supri. Surya wants to fight chain snatchers because his mother died due to a chain snatcher but he never really fights any crime. The movie takes forever for Surya to grow up but then the whole premise/plot of Surya deciding to get Karate Mani’s chain from his brother Jimmy seems ridiculous.

Supri’s family backstory seems totally unnecessary and tonally inconsistent from the rest of the movie. Karate Mani seems to be able to fight with hundreds of men but then is found captured with hands tied.

Abhimanyu Dassani was good as Surya and he was good in the action scenes. Surya’s character is somewhat like the
Kick-Ass’ character from the movie Kick-Ass. Radhika Madan looked pretty as Supri and was good in the action scenes. She looked very short though in many scenes. Gulshan Devaiah was good as Karate Mani and excellent as the psychotic villain Jimmy. Mahesh Manjrekar was very good as Surya’s grandfather.

Screenplay by Vasan Bala is bad. The story/plot is too ridiculous even for a martial arts action movie. One may be a action movie buff and may want his movie be a tribute to all the action movies that one watched while growing up but still the movie by itself has to be entertaining. Unfortunately Mard Ko Dard Nahi Hota is boring and not entertaining at all.

The movie works neither as a comedy/spoof nor a superhero/action movie. Vasan Bala directs scenes as if they are very smart/witty/funny but they are not funny at all. They hardly make you chuckle. If only the movie was as funny as the two teasers they released it could have made for a entertaining movie.