I’ve never been a part of any camp: Priyanka Chopra 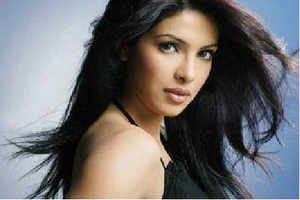 Refusing to dwell on her personal equations with co-stars, Priyanka Chopra talks about the professional space and what makes her tick in Bollywood

She had been in the news for not the best reasons of late. And yet, Priyanka Chopra refuses to let the rumours affect her. At least professionally. When faced with personal questions about rumours of her special friendship with Shah Rukh Khan, the actress fidgets and declares, “I will not talk about this. I shall never talk about this.” However, when it comes to her films, the actress doesn’t shy away from answering.

About her upcoming Dharma Productions venture ‘Agneepath’, the actress gushes, “I am nervous and excited. Reports have been brilliant. They have liked Hrithik (Roshan), Sanju ( Sanjay Dutt) and my work. More than anything, they have loved the film. I’m very proud of Karan (Malhotra, the director) as this is his first film and I’m his first heroine. For me, it’s not a remake. I hadn’t even seen the original ‘Agneepath’ till I signed this film. Also my role has been written fresh.”

“Miami to Mandva. It was lovely working with Dharma again. As an actor, you don’t involve yourself with the production much. You’re closer to the director,” says the actress.

Despite her proximity to Dharma, her relationship with Yash Raj Films is reportedly not as strong. Rumour has it that Yash Raj did not keep its promise of offering her a big film after she agreed to do a small project ‘Pyaar Impossible’. However, the actress maintains that it wasn’t YRF she was working for but Uday Chopra Productions.

Good with a section of the industry and not too close to the rest, this is Priyanka’s career graph in a nutshell. However, with single minded determination and what trade analyst Amod Mehra calls ‘luck’ the actress despite being shunned some, has managed to maintain her position in Bollywood.

The actress has also tried to hold on to the few ‘good’ relations she has in the industry. For example, despite delivering an award winning performance for Madhur Bhandarkar in ‘Fashion’, the filmmaker’s next project ‘Heroine’ finally had Kareena Kapoor. But the actress doesn’t begrudge him that. “I couldn’t have done that role. Working on a similar plot did not make sense for Madhur and me. We spoke about the film several times. I’m glad that Kareena’s doing it. Both of them will work very well.”

Priyanka puts up a brave front on her reported alienation from the Salman Khan camp. “I have worked with every co-actor possible. I don’t come from a film background. I don’t have relationships with people in terms of uncles and aunts. I have been an outsider. Wherever I’m today is due to the support of this film industry.

They have given big films and amazing work to me. It hasn’t been because of any director, production house, actor or a person. I have never been a part of any camp. I respect every co-actor tremendously and equally. I would work with anyone,” declares the actress.

As for her not having worked ever with the third Khan of the triumvirate, Aamir, she simply laughs, “Ask Aamir. If the offer hasn’t come to me yet, what can I say about it?”

While in hushed tones, insiders do cite her friendship with Shah Rukh as the reason of her alienation from the other Khans, when questioned about her rise and rise in Bollywood, they all agree upon one thing – her professionalism.

According to Suneel Darshan, who gave her the first break with ‘Andaaz’, ” Priyanka is not the conventional beauty like Kareena Kapoor. Despite that, she has done very well for herself. Knowing well that the perks of stardom can be really high, she has set her goals accordingly. There is determination written all over her face. When it comes to her, there is hardly anything left between the apple and the arrow.”

But trade analyst Amod Mehra feels differently. “Kareena is number one. Katrina is on number two. And Priyanka who was once on the second position is now on number three. That’s because Priyanka has made all the wrong choices and given many flops – ‘7 Khoon Maaf’, ‘Kaminey’, ‘What’s Your Rashee’, ‘Drona’. I would say that she has been lucky,” says Mehra and adds, “Also, she has limited choices. Her big star bracket is restricted to SRK and Hrithik. Salman doesn’t want to work with her. Aamir hasn’t worked with her yet. She hasn’t worked much with Ajay Devgn. And she can’t work with Akshay Kumar.”

Filmmaker Ratan Jain who worked with Priyanka in ‘Aap Ki Khatir’ however seems to be almost on the same page as Darshan. Maintaining that films in Bollywood depend on the male actor, Jain says, “Priyanka is a very popular actress. She is an excellent performer too. Else, why would she be cast in so many movies? Note that she has also improved her acting abilities over the years.”