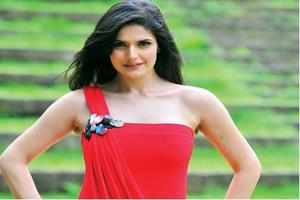 Reportedly, Zarine Khan has given up an item song called “Main Chamiya No 1” because it also features Vivek Oberoi.

Clearly, she didn’t want to upset her mentor Salman Khan.

Says a source, “Zarine has been sending out feelers that she wants to do item songs, as she needs the money to buy a house. When good friend Maanayata Dutt heard that Zarine was on the lookout, she spoke to hubby Sanjay Dutt and got her one in his next film ‘Zilla Ghaziabad’. Maanayata spoke to Sanju’s business manager Dharam Oberoi and got her a decent fee (30 lakh) for it. Zarine loved the song and agreed to do it.”

However, when she found out that Vivek Oberoi would also feature in the song, she backed out.

Reveals an insider, “When Zarine heard about Vivek, she got scared. She owes her career to Salman. He turned her from a background dancer into a leading lady. She felt he wouldn’t approve of her associating with Vivek in any capacity.”

Salman still has to forgive Oberoi for calling a press conference against him nine years ago.