Vidya already dreaming about her next Filmfare Award? 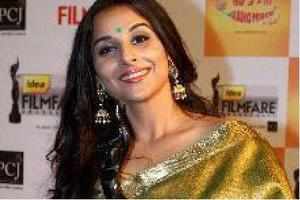 Actress Vidya Balan has won three Filmfare awards in a row. Happy with her hattrick, she dedicated her most recent win to the cast and crew of both films she was nominated for: Dirty Picture as well as No One Killed Jessica.

“Of course, I won the award for Dirty Picture, and I thank the cast and crew for helping me achieve this. I was also nominated for No One Killed Jessica – a movie very dear to me, and I’d like to dedicate my Filmfare to the cast and crew of that movie as well,” said an ecstatic Vidya.

With the promos of Kahaani getting some good response is another award for Best Actress in sight already? “Let’s not jump the gun,” said the actress, when we caught up with her. “It’s too soon to say anything about Kahaani. All that I can say is that it’s a movie extremely close to my heart. It was a mentally, emotionally and physically demanding role to play as well. We do movies because we like the script. When we sign them and shoot them, we aren’t thinking awards. Trust me.”

So does the actor feel she is being typecast into the serious, realistic, non-glam mode? “As long as scripts are being written for you, as long as the role offered seems challenging and drastically different from what you have done before, as long as you are getting the opportunity to work with some great talents, and as long as everyday is a learning experience, I don’t really care about the typecast or whatever term one may give something. I’m enjoying myself, and that’s what really matters.”