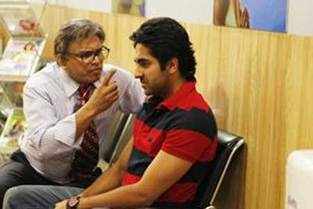 Story: Unemployed Vicky is urged by a fertility sexpert to make better use of his ‘wasted’ sperms. He turns this into a ‘productive’ idea, until it becomes the origin of more troubles.

Movie Review: Looking for designer babies anyone? With the looks of Brad Pitt/Aishwarya? The stardom of SRK? The talent of Lady Gaga? Well, you need a super-sperm that’s one in a million, and Vicky Donor (Ayushmann Khurrana) is full of the ‘spunk’ that your fertile imagination needs. He’s the biological dad of 53 healthy children! Want more? He’s unemployed, single, and his view of sex is, jitna mile, utna kum. But don’t slam him as a sex-maniac just yet. So what if all he does is ‘shag’ for a living. At least he breeds joy, cheer and sperms all over the world.

Vicky’s over-the-top Punjabi mother (Dolly Ahluwalia) – 100 decibels above average noise levels – constantly nags her puttar about his worthlessness. On the other hand, he’s pampered by granny Biji (Kamlesh Gill) – more progressive than all the Dilli-wali kitty party aunties. In the meanwhile, fertility expert, Dr. Chaddha (Annu Kapoor), is frantically looking for a sperm donor for his rich clientele. Vicky is his perfect find, with the Alexander of Sperms. But obviously, he can’t disclose anything about his baby-boom(for the moolah, of course) to anyone. It’s just too unmanly for a Punjab da sher. Even the love of his life, Ashima Roy (Yami Gautam) who he eventually weds, is kept in the dark. This plants the seed for other complications, which pop up as surprises later.

Ayushmann Khurrana is rock solid. In this tailor-made debut, he’s natural and impressive. He doesn’t come from a filmi gene pool, but he’ll hold his own (pun intended) in Bollywood. Newbie Yami Gautam is the estrogen element in this sperm-dominated enterprise. She’s a sheer delight to watch, emoting effortlessly.

What keeps this film together is the solid supporting cast. Annu Kapoor, in a convincing performance, is bankable as ever. He only speaks sperm language, referring to men as ‘complicated sperm’, ‘confused sperm’, et al, and giving advice on how to ‘up’ the count. Dolly Ahluwalia, plays the dominating mother and saas-serving bahu with melodrama and laughable lines. The unforgettable act is Kamlesh Gill, lighting up every scene with sasuma-like sarcasm, interspersed with witty one-liners and a drunken scene that cracks you up.

Director Shoojit Sircar is back with a bold, first-of-its-kind concept that’s taboo. He makes this sperm of an idea swim all the way. He intelligently uses comedy to break mindsets, without embarrassing moments or awkward lines. The film entertains, without preaching sexual moralities or social service. Even the music blends beautifully with the story. The winner here is the script (Juhi Chaturvedi), penned with subtlety, oodles of non-slapstick humour, while sensitizing the cause at hand. However, the lingo gets too Punju at times and the last twenty minutes could do with some editing.
It takes a man to make a film like this, literally. Kudos to John Abraham for his brave maiden production.