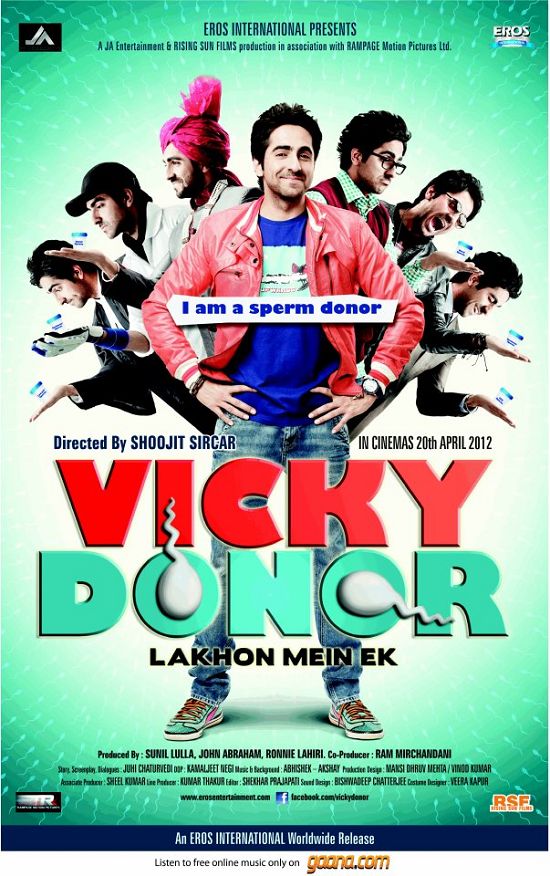 A wise man once remarked, “If we can donate blood to save a life, why can’t we donate sperms to grant a life?” Couples are ready to pay big bucks for the sperm of well placed males. The amount varies depending on the looks, personality, academic ability of the donor. Despite this, we’re too shy to discuss issues relating to artificial means of fertilization. Couples suffer years of infertile living, but are in two minds when told to opt for the scientific and legal techniques of external fertilization. Despite a contemporary outlook, some of us still consider it taboo to address sex-related matters candidly, which explains why the concept of a sperm donor on celluloid is unthinkable. A film like VICKY DONOR shuns the conventional plot and narrates the story of a sperm donor, thus bringing the issue out in the open determinedly.

John Abraham turns producer with a forward-thinking, avant-garde movie that holds worldwide appeal. In fact, a lot of actors’ foremost production centres around themselves, capitalizing on their star power, but John’s initiative of opting for an offbeat theme and choosing a newcomer to enact the principal lead needs to be lauded. Above and beyond, the endeavor to transport the issue of artificial insemination out of the closet and presenting it in a light tone in the backdrop is an added move that merits acknowledgement.

In an environment where the job pressures are high and couples lead an erratic and unhealthy lifestyle, Dr. Baldev Chaddha [Annu Kapoor], a well-qualified fertility expert, runs a fertility clinic and a sperm bank in Daryaganj, New Delhi. Unfortunately, he has more failed cases to his credit than successes. A healthy, high-performing donor is the need of the hour.

Vicky Arora [Ayushymann Khurrana], a young, good looking Punjabi guy from Lajpat Nagar, is the only son and of no financial support to his mother Dolly [Dolly Ahluwalia], a widow, who runs a small beauty parlor from home. As luck would have it, a small brawl in the colony brings Dr. Chaddha and Vicky face to face, where Chaddha concludes that Vicky could be that donor he has been looking for. From here on, Dr. Chaddha’s days and nights are spent in convincing Vicky to become a donor till he finally gives in.

Vicky finds his love interest in Ashima Roy [Yami Gautam], a pretty Bengali girl, who works in a bank. But soon their hunky dory world comes crashing down because of Vicky’s past as a donor.

A youth-centric movie with a humorous theme, VICKY DONOR is fundamentally a romantic comedy between a Punjabi boy and a Bengali girl set against the backdrop of sperm donation. Nonetheless, director Shoojit Sircar takes a light-hearted, optimistic look at the issue, coming up with a film that entertains and enlightens the viewer vis-à-vis infertility and artificial insemination. VICKY DONOR may be a diminutive film in terms of budget and costing, but when you see the issue it tackles, it does not give the impression of being an undersized film.

Director Shoojit Sircar takes giant strides as a raconteur, balancing the two halves adroitly. While the first hour tilts towards light moments, the drama, or the twist in the tale, comes up in the post-interval portions. I’d like to make a special mention of the screenplay [Juhi Chaturvedi]. Not once does it deviate to the tried and tested track. It’s engaging content from commencement to conclusion and along with a set of impeccably cast actors, it’s one joy ride you can’t afford to miss. Having said that I’d like to add that the movie loses some steam [for a few minutes] in the post-interval portions, but, thankfully, VICKY DONOR doesn’t get unbalanced. The movie accomplishes what it sets out to do — it enlightens and entertains and that, in my opinion, is no puny achievement.

The music of VICKY DONOR is better than expected. ‘Rum Whiskey’ [appears twice in the movie] is addictive, while ‘Pani Da Rang’ [both male and female rendition] adds a lot of weight to the soundtrack. The dialogue, penned by Juhi Chaturvedi, are in sync with the mood of the film. The North Indian dialogue-baazi, especially the conversation between Ayushmann’s mother and grand-mom, stands out in the film.

It’s a performance-oriented role and Shoojit Sircar has, very aptly, chosen a deserving candidate for the assignment. Ayushmann is a complete natural, has all the trappings of a fine actor and delivers a super confident performance. I’d like to single out two sequences that make you appreciate that he’s an artiste of caliber and aptitude. One, when he reaches Kolkata to fetch his wife and two, the finale, when he visits an orphanage. Annu Kapoor is an exceptional actor, no two opinions on that, and he’s outstanding here. The gifted actor adjoins enormous humor to his character and his mode of selecting a sperm donor on the basis of personality, race, academic ability and other factors evoke immense mirth. Popular television actress Yami Gautam makes an imposing debut. She adds enormous value to the movie by her act, screen presence and striking looks. She’s truly admirable towards the latter part of the film.

Dolly Ahluwalia is exceptional and so is Kamlesh Gill, who enacts the part of Ayushmann’s progressive grand-mom. In fact, the grand-mom is quite a scene-stealer! Jayanta Das, enacting the role of Yami’s father, is proficient. John Abraham manages to pack a punch in a song.

On the whole, VICKY DONOR is a small film with a big heart. The makers have had the courage to bring a diverse issue out in the open, narrating a daringly different story without getting preachy. Witty, funny and also emotional, VICKY DONOR is forward-thinking, progressive commercial cinema which vastly enlightens and hugely entertains!