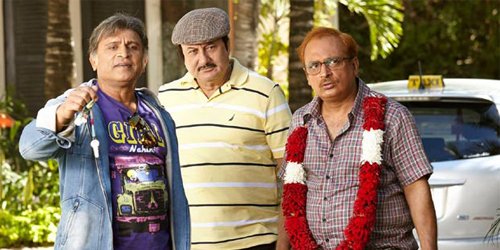 The Shaukeens, directed by Tere Bin Laden’s Abhishek Sharma and written by Tigmanshu Dhulia, is really two films for the price of one. But sadly neither is worth the price of a ticket.

You have the part based on Basu Chatterjee’s Shaukeen, where three dirty old men try to get their grubby paws on a nubile young thing. Then there’s the part involving Akshay Kumar, in which he basically plays himself, a reigning superstar, and uses the opportunity to spoof Bollywood. This track is sporadically funny, but the filmmakers don’t know where to go with it, and end up making a complete mess of things.

Lecherous oldies Laali (Anupam Kher), Pinky (Piyush Mishra) and KD (Annu Kapoor) head for a vacation to Mauritius where they meet bohemian “earth child” Ahana (Lisa Haydon), who instantly becomes the collective object of their desires. Haydon, who was so good in Queen earlier this year, appears to have been cast in this film for no reason other than her willingness to be crassly objectified.

I found myself cringing after a point when the trio of ageing desperados wouldn’t stop begging Ahaana to forget about her romantic woes and slip into a bikini. Or when they gape, open-mouthed and wide-eyed, as she obligingly frolicks in the sea, the camera caressing her every curve. There are ugly close-ups of male crotches in tight swimming trunks, awkward jokes featuring the sexual performance drug Shilajit, and repeated utterances of the words “tharki buddha”.

Don’t ask how this portion of the story converges with the part in which Akshay Kumar, tired of doing the same thing over and over again in his films, seeks street-cred and a National Award by signing a Bengali art film. It’s these bits, in which Akshay sportingly sends himself up, that are the film’s best moments. Now if only the connective tissue between the wildly contrasting narratives were stronger.

I’m going with two out of five for The Shaukeens. There are the odd moments of inspired humor – all crude – between the three senior actors, but for the most part they’re wasted.