The Next Three Days Review by Sputnik 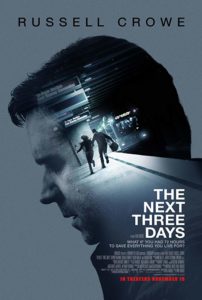 Lara Brennan is arrested for murdering her boss with whom she had an argument. She was seen leaving the scene of the crime and her fingerprints were on the murder weapon. With no legal means left to him her husband devises a daring plan to rescue his wrongfully imprisoned wife from jail.

The movie is a remake of a French movie Pour elle (Anything for Her) (2008). Had skimmed through the French movie Anything for Her. The Next Three Days is pretty much scene to scene, dialogue to dialogue remake for the most part. The kid is older in the American version. They added more scenes after he rescues his wife from the hospital and a zoo diversion (which had one stupid scene) to add more drama than the original. Diane Kruger of Troy fame acted better in the original than Elizabeth Banks in the remake.

Anyways the movie is entertaining though some of things seem implausible. Russell Crowe was good as the husband trying to rescue his wrongfully imprisoned wife from jail. Elizabeth Banks was ok as the wife. Olivia Wilde has a small role. Liam Neeson was good in a small cameo.