The Irishman Review by Sputnik 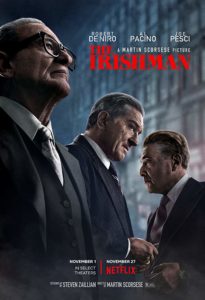 Hit man Frank Sheeran looks back at the secrets he kept as a loyal member of the Bufalino crime family in this acclaimed film from Martin Scorsese.

There are some excellent scenes like the scene where Hoffa and Tony meet in Florida or the “What kind of fish” scene or the scenes where Frank keeps relaying between Russell and Hoffa.

Robert De Niro is very good as Frank Sheeran but even with the de-aging vfx he still looked old especially in scenes where he was supposed to be young or had to be physical. His best scenes were the phone scenes – where he is talking to Hoffa or the scene where he talks to Hoffa’s wife Jo.

Al Pacino is excellent as Jim Hoffa. He will most probably be nominated for an Oscar for Best Actor and has a good chance of winning too. He has the meatiest role in the movie and this is one of his best performances in a long time.

Joe Pesci is excellent as Russell Bufalino. He plays such a calm and composed gangster who hardly displays any emotion but is yet very dangerous. One can’t help wonder if it is his past performances in movies like Goodfellas that is causing you to think he is so dangerous. He will most probably be nominated for an Oscar for Best Supporting Actor and has a good chance of winning too.

Martin Scorsese’s direction is good but the movie is very leisurely paced and is quite long at almost 3 and a half hours long. The movie could have been edited by quite a bit. Screenplay is somewhat flawed as an old Frank is narrating the entire story but there is also a car drive scene going on in parallel which doesn’t make any sense. The de-aging vfx doesn’t really work as you can’t even really tell what age they are supposed to be because they still look old when they were supposed to be young.

Even with the flaws the movie is a must watch just for the performances of the three greats – Robert De Niro, Al Pacino and Joe Pesci.