The Hunt for Red October Review by Sputnik 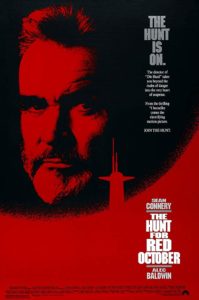 Based on the popular Tom Clancy novel, this suspenseful movie tracks Soviet submarine captain Marko Ramius (Sean Connery) as he abandons his orders and heads for the east coast of the United States. Equipped with innovative stealth technology, Ramius’ submarine, “Red October,” is virtually invisible. However, when an American sub briefly detects the Russians’ presence, CIA agent Jack Ryan (Alec Baldwin) sets out to determine Ramius’ motives, fearing he may launch an attack on the U.S.

The movie is very good and very engrossing till like the last twenty minutes or so when it becomes too cheesy. It probably should have ended at a earlier point but it goes on with some unnecessary scenes of torpedo attacks. It is also contrived as the supposedly stealth submarine is still able to be tracked by the Americans whereas the Soviet submarine is unable to track the American submarine. John McTiernan’s direction is good except for the last twenty minutes or so.

Sean Connery was very good as the Soviet submarine captain Marko Ramius though he was speaking in Scottish accent. Sam Neill was very good as Captain Vasily. Alec Baldwin felt miscast as Jack Ryan. He was ok for the most part except in few scenes where he was really bad. Alec imitating Sean Connery when it is supposed to be this intense life and death scene was ridiculous.