The Ghost and the Darkness Movie Review by Sputnik 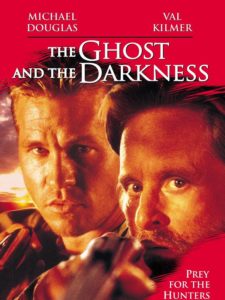 While working for a railroad baron in colonial Uganda, engineer John Patterson finds his construction efforts stymied by a series of lion attacks. Grizzled hunter Charles Remington is called in to head the desperate effort to kill the animals.

The movie is based on the book The Man-eaters of Tsavo. Very good movie – very engrossing but its a fictionalized account of the true story of the Tsavo Man-Eaters who were a pair of notorious man-eating lions responsible for the deaths of a number of construction workers on the Kenya-Uganda Railway from March through December 1898. Link

Michael Douglas was good but his character is totally fictional and there was no such character in the true story. Val Kilmer was good as the Engineer who is also a hunter. Tom Wilkinson was very good in a small role. John Kani was good. Did not like Om Puri in it.