The Front Row: Shah Rukh Khan on Batman, His Future 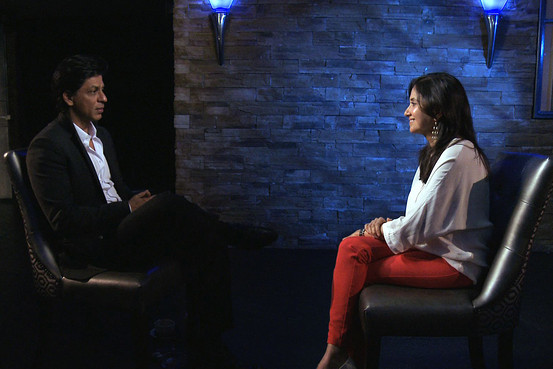 Anu: Shah Rukh what is the hardest thing about being a super hero?

SRK: First let me just tell you what I think a super hero is, obviously they are in tights and they fly. I think the reason and the need when it spread there and anywhere else in the world, comes out from a great desire of the heart and mind to be protected and rescued. I think all of us have that, we don’t accept it and that’s why the birth of super heroes.

I’ve grown up reading all the comics; Batman, Superman, Spider-Man and some strange ones which never made it to be popular either. I had a red towel, blue swimming trunks. I used to wear them and I used to sit on the bed and fly. I had my own vehicle- Batmobile, so I always wanted to look at this genre and I did with Ra.One. I think in India, one of the research teams told me when we were making this film, we were too far gone to retract, but they told me that there are 10 genres in terms of popularity in India and science fiction and super heroes is the last one.

SRK: Because I think super heroes are still the artistic parallel cinema in commercial cinema .When you make an art film, we keep a low budget because it means that you have 10 people to watch the film and just enough money to make it for those ten.

It’s the same thing for a super hero film in the commercial sense. You have just enough money to make it for that many audiences who are ready to watch it. So it’s an art film, in the commercial sphere.  I mean, you go and suggest to one of the big directors who has made a super hero film, ‘Now Spider-Man’s got to dance’… he’s not going to put a dance to it. But we need to put a dance in it because the film is so expensive you need to be able to attract every aspect. You need to have comedy in it. You can’t make it very linear about this one person who has one weakness and then grows to save the world.

SRK: I think we don’t have the acceptance, we have the bucks.

Anu: You think so?

SRK: I have the bucks, I have the infrastructure, Karan Johar has it, Mr. Yash Chopra has it, all of them have it. It’s 10 times cheaper to make a film like this in our country. I’m not being the prophet of doom here, I’m telling you what’s there to be seen. You know with the access into the digital world, the exposure, Hollywood films are releasing a week before they are releasing in London or in America, so the kids want to see that.

Anu: So does that worry you Shah Rukh? Do you think about 10 years from now, what?

SRK: I mean I made a superhero film and I’m okay. Everyone else out there they are going to suffer .You can laugh at my Ra.One now but when I come out with Ra.One 7 on a wheelchair then you see. (smiles)

Anu: Shah Rukh last month you finished 20 years in movies. What are you hungry for now?

SRK: The 20 years have passed away really fast. I think I’ve been in about 70 films now. I think the main thing is I still haven’t found out what turns me on about doing this.

SRK: And that’s why I keep going on. I have never gone on a set and felt, “Okay now I know I have to do that”.

SRK: I’m very nervous. Nervous means I’m not like nervous-nervous, I know my lines I know my stuff, I feel very comfortable with cameras. But I’m not at all confident that I’ve done this. When I see actors in other films they like ooze confidence, they look like they own the space.

SRK: So many of them, most of them. I think the fact that I’m still ill at ease of knowing what I’m supposed to do just makes me keep on going. It doesn’t feel like 20 years. I always tell this to my daughter and my son that you know every morning I wake up and think of the same thing, that this is the first shot of my life so I better make it stick and this is the last shot of my life and I won’t get another chance so I better make it stick.

So in both cases I’m just, like, I better make it stick. I know I make a lot of mistakes in acting. I can sense them, I can feel them. So it’s also not looking for excellence. I’m not looking for perfection, that’s extremely boring.

Anu: Shah Rukh, are there any regrets? Is there anything you wish you had done differently?

SRK: No it’s been good. Like I say it’s the great Indian dream. I’ve done everything right, I think especially now I think with my cricket win also. I don’t get time, Anupama, so sometimes I wish I could have done that film also. I wish I had worked with that person also when I got the chance but there were reasons that it didn’t happen and if it’s not mine then it’s not the best.

It’s how I think and I know it’s wrong to think like that but that’s the way you survive every morning and I’m really happy with the way I’ve done. At this point no regrets except for the fact that I’ve injured myself a lot physically so that hurts. Even in romantic scenes now you hug a girl and your shoulder is not rising and the girls have become taller so it’s a big problem hugging them. But no regrets.

I do wish I was physically as good as I was 10 years ago before my spine surgery though it doesn’t come in the way of my working. I can still wear tights and fly. I think it’s time you wrote the second part of that book (King of Bollywood) or should I have some regrets and then you’ll write it?

Anu: We have got to spice up the story.

SRK: Yes, too tame. When I read about myself, whether it’s a business achievement, whether it’s in terms of some mad behavior somewhere, I am like, “Should I turn around and say I didn’t do that or should I let it be and let them feel it’s alright he’s a little mean like that and he is a little sensual like that?”

I don’t know how to react. And I’m too shy to even clarify it, so I just keep quiet. But yes. I think I’ve led a very tame life. I’ve worked a lot, about 15-16 hours a day, never seemed like work. I’ve really enjoyed it. The kids are a great boon. They are the central, focal point of my life. I hope my daughter becomes an actor. I really hope she becomes an actor. That would be regretful if she didn’t.

Anu: And you said you would have figured out how to act by then, right?

SRK: Oh yes. I want to do some exciting films. I really want to spend the next five years doing cinema which can make me fail. But to do that, I have to first do safe films.

I think the time has come when I can open up, get out of my own shy shell and comfort zone, so to say, and try and do new stuff and still make it commercially viable because that is important. I want to work with directors who make cinema which is really wonderful and push, you know, the bar a little more so that the youngsters do not look down upon our films.

Because if we don’t, we don’t have anyone to blame 20 years from now. I think it’ll be really sad if I’m sitting down 20 years from now and saying ‘hamaare zamaanein mein hum kitni achi picture banathe the.’ I think that will be the saddest comment that any of the leading Indian film personalities can have 20 years from now.

SRK: Thank you very much.