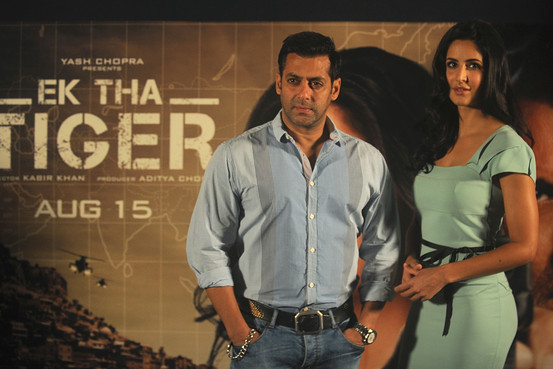 In case you were wondering, Salman Khan does not think of himself as a star. “Why would I think of myself as a star?,” he tells Anupama Chopra.

Mr. Khan and Katrina Kaif – two of Bollywood’s best-known names – speak with Ms. Chopra about their careers, working together and being people like us ahead of the release of their upcoming movie “Ek Tha Tiger.”

Here is an edited transcript from her conversation on “The Front Row with Anupama Chopra.”

Anupama: Salman, when I had interviewed you a few years ago, I asked you why you play every role as yourself instead of playing it as the character and you turned around and said, “Well do you have a problem with my personality?” Has that changed with a film like Ek Tha Tiger?

Salman Khan: See, working on character is very simple. You get the script, now script ke andhar aapko yeh dialogues milthe hai aur aap ne bol diya. [In the script, you have the dialogues and you just have to deliver them.]

Katrina Kaif: Salman is saying this but, honestly, when you see him on set he’s very quiet. He’s sitting there, he’s chewing on his shirt or something like that and he’s thinking. So he’ll not tell you he’s done work on it but he has.

Salman: You know there are some people who make you realize that you’re working very hard. And then there are some people to whom it just comes naturally. It’s God’s gift, perhaps. You come to a set and you’ve heard the lines and when you’re about to say it you’re like: Can I say it like this or can I not say it? And that is my working on the character.

Anupama: Katrina, you agree with that?

Anupama: So both of you imbibe the character instinctively?

Anupama: Katrina, what makes you sign a film? Do you think about what fans would want to see?

Katrina: I think you just go by what would you want to see. And I think I’m a fairly normal person. I enjoy the typical movies when they release. I think you have to find a balance especially in this industry. First, you have to find the audience you’re making the films for. I think that’s the first thing to understand and to keep in mind because you move in a small circle, the industry is made up of the same kind of people and you start losing touch with how the public thinks.

Salman: You know, Katrina, if suddenly one person starts thinking that the person is a star and not a man then he’s lost the plot.

Anupama: Salman, you don’t think of yourself as a star?

Salman: No, why would I think of myself as a star? That’s a different image [pointing to the poster of Ek Tha Tiger.] I worked in that film but that does not mean that’s me. There must be 5% or 10 % of me in that. If you’re believing that that man is me then it’s a bummer. That means your thinking is so going wrong. I want to do the films that I want to watch correct? So that is the kind of films I’m doing. I want to watch heroism. Now I will be 70 years old. I don’t suit the bill to play Tiger then. I’d be a mad man to try that or to try a romantic film at 70.

Anupama: Salman, your fans are so passionate about you. Do you ever introspect about what this connect is? Do you ever get pressurized?

Salman: I have no idea and I don’t even want to know. They don’t have a clue, I don’t have a clue. Why should they find out? Issme koi yeh chaand pe thodi pahunch rahe hai ki issme research karne ki koi zarurat hai. [This is not like a mission to the moon that needs to be researched and investigated.]

Katrina: The way I’ve known him over the years, he is actually very basic. Everything is kind of black and white and he doesn’t entertain too much of layers. So if you see him, as a person his movies are the same. We know a lot of actors who are very complicated. Those people could probably be part of films that might be slightly more complex. The person he is in real life is simple and the same thing applies in his films.

Anupama: Katrina, you have known him for a long time. Has he changed much as an actor?

Katrina: No, his approach is the same. He approaches his films the same way he approaches his life in general that is basic emotion, what works, what doesn’t work, what he feels is right or wrong, I think that’s why his films kind of tend to be at that level.

Anupama: And Salman, has Katrina changed as actor?

Salman: She’s grown. She is a lot more confident now.  She comes prepared with her work and she’s at ease now. She’s always been working hard. So that hard work has paid out. Now when somebody is saying lines she can react to them because she understands what he’s saying. Now instead of saying ‘Kya?’ she can say ‘Oh, achcha’.

Anupama: Katrina, what is the one singular factor in your success?

Katrina: I don’t think there’s been one factor. I think it’s been a combination of a lot of things. First of all, it is destiny. I think that’s important.

Salman: I have the answer to that. It’s her hard work. I have never seen anybody so hard working. Physical labour se zyaada, mental bhi hai ek toh language seekhne hai, ek toh fit in karna hai [more than physical labor, it is also mental. She has to learn the language, stay fit] she has to look good, she has to dance correctly, everything is there. And she appreciates what God has given. It’s not that she achieved this position so now she’ll take it easy.

Anupama: Salman, you are going to finish 25 years, what’s your secret?

Salman: A lot of people work a lot harder than I do. I mean, a lot lot harder.  I guess I’m just lucky. I’ve been at the right times, right places.

Anupama: Just lucky for this long?

Salman: Yes, I’ve been fortunate. He [God] always gives you two choices and I always try and choose the other one but he pulls me back to the right one.

Anupama: Wonderful. Thank you so much.