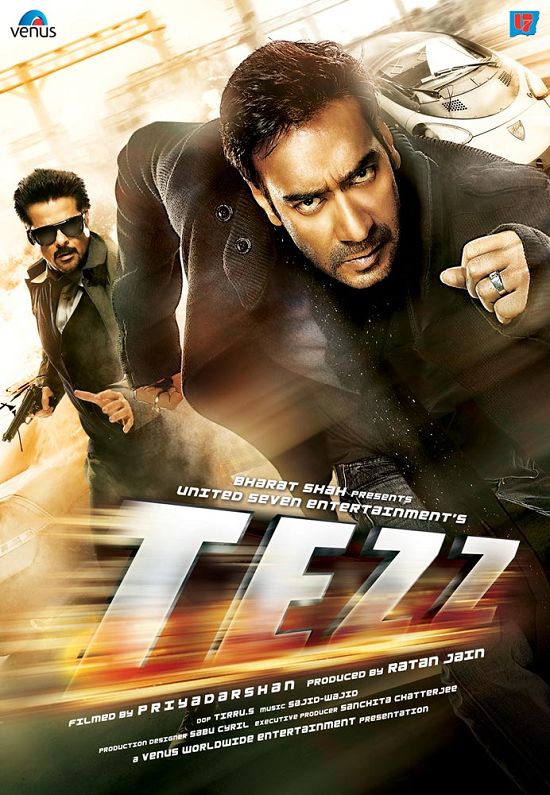 Riveting action movies are a rarity in Bollywood. Action movies that stand out come along once every few years. TEZZ, helmed by Priyadarshan, is one of them.

The story of TEZZ is uncomplicated… A team of Asians place a bomb on a high-speed train. The authorities receive an anonymous threat that a triggered bomb has been planted on a bullet train operating between London and Glasgow. If the train decelerates or loses speed below a certain tempo, it will be destroyed along with its many passengers, unless a ransom is paid. The police want to stop the bombs from exploding, while the railway authorities want to save the lives of the passengers and they soon find themselves in a disagreement under the frantic pace set by these dramatic circumstances.

Does the plot sound familiar? Yes, I am sure, it sounds recognizable. But a vital clarification, before I proceed further. It’s widely discussed that TEZZ is generously inspired or a replica of the 1994 Keanu Reeves starrer SPEED. It’s also said that SPEED was a recreation of the Japanese thriller SHIKANSEN DAIBAKUHA [1975], which was also known as THE BULLET TRAIN. Reportedly, even the Thai film industry got inspired by the Japanese movie in 1977 and made a movie called 1 2 3 MONSTER EXPRESS. While the Japanese movie had the plot set on a high-speed train, SPEED was on board a bus. Without giving the plot away, I’d like to say that TEZZ does seek inspiration from the above-mentioned films, but is no replica or a duplication of the above-mentioned movies.

TEZZ is a good looking thriller filmed with expertise. Loaded with an ingenious premise, thrilling moments and action, Priyadarshan has curved it into a tremendously well-executed motion picture. The film’s sole objective is to keep moving at a feverish pace, keeping the spectator completely immersed and entertained with the on-screen occurrences. Sure, there are some unwarranted moments [more on that later!], but the pacing is so breakneck and the cinematography so superior that it’s easy to overlook the few unreasonable moments.

Shot across England with action sequences like none other, one scarcely pauses to take a breath. If you’ve ever travelled on the lightning fast bullet train, you know how terrifying the thought of an accident is. If you enjoy panic movies with ultimate action and edgy thriller suspense, then TEZZ should do the trick for you.

On the flip side, the back story of Zayed and Sameera vis-à-vis their camaraderie and solidarity with Ajay could have been more persuasive and better elucidated for a stronger impact. Only then would the episodes involving Zayed and Sameera and what prompts them to risk their lives to support Ajay in implementing his plans appear compelling. Similarly, the portions involving Ajay and Kangna, towards the latter half, appear synthetic. The eagerness and zest of a couple uniting after five years is evidently amiss. Ditto for the final moments. The hand to hand combat scenes between Anil and Ajay adds value, but appear unwarranted and only stretch the narrative inanely. Besides, the visual effects could have been a wee bit superior.

But these are trifling discolorations. The plus points effortlessly prevail over and outnumber the deficiencies here. Though there are ample thrilling moments in the enterprise, I’d like to single out two chase sequences that are simply outstanding — the first involving Sameera and the second featuring Zayed. Besides, the film lives up to its title, with the plot unraveling at a feverish pace. Last but not the least, the performances by the principal cast is a big plus.

Action choreographers Gareth Milne and Peter Pedrero, who previously worked on several international films, pool resources with Priyadarshan for high-quality action on screen. They do a remarkable job. Tirru’s cinematography deserves special mention. This must’ve been an intricate film to shoot, but the outcome is at par with any international film. The car stunts, the chase sequences and of course, the sequences in a moving train are filmed with precision. Sajid-Wajid’s musical score is satisfactory. The Mallika Sherawat track at the very outset sets the ball rolling, while the romantic track between Ajay and Kangna is smartly interwoven in the narrative.

It’s a treat watching Anil Kapoor on screen. Though the actor has been an integral part of so many movies in the past, you can never accuse him of repeating himself. Besides, he may be in his early 50s, but that hasn’t deterred Anil from performing the high-octane action stunts with flourish. Ajay Devgn excels yet again. The actor has the perfect demeanor, attitude and physical appearance for the character he portrays. Also, those who felt that Ajay had cut down on action roles of late are in for a treat. Ajay’s character has an emotional side, but it’s the action portions, which he handles like a complete pro, that makes his character even more appealing.

Kangna is an integral part of the film, but the screen time is limited. Nonetheless, her sequence with Anil towards the final moments catches your attention. Zayed doesn’t get ample scope, but he’s fantastic in the chase sequence towards the second hour. Sameera gets to do some daredevil stunts and also gets a couple of interesting sequences to leave a mark and she clutches the opportunity with both the hands. Mohanlal, an actor par excellence, gets minimal scope. Boman Irani is fantastic. One can easily rate it amongst his best works. Mallika Sherawat sizzles in the ‘Laila’ track.

On the whole, TEZZ is a taut, entertaining action spectacle. Those with an appetite for well-made thrillers should lap it up!