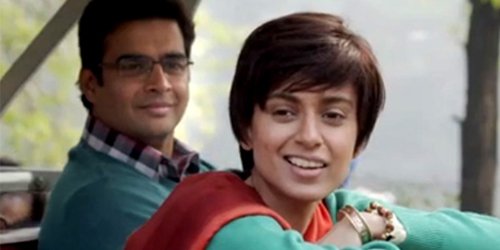 Every once in a while comes a film so disarming, you can’t help but look beyond the contrivances and submit yourself to its infectious charm. Tanu Weds Manu Returns, directed by Anand L Rai, is a crowd-pleaser in every sense of the term. It’s funnier, better acted, and far superior to 2011’s Tanu Weds Manu, which chronicled the unlikely union of its mismatched protagonists.

Hardly surprising then that when the new film opens, we learn that the marriage between high-strung Tanu (Kangana Ranaut) and “boring” doctor Manu (R Madhavan) has gone sour in the four years that they’ve lived together in England. Deserting Manu in a mental healthcare facility, Tanu returns home to Kanpur only to live up to her enfant terrible reputation, even while fanning the flames within the hearts of both her ex-boyfriend Raja Awasthi (Jimmy Shergill), and Chintu (Mohammed Zeeshan Ayyub), a tenant in her parent’s home. A livid Manu, meanwhile, returns to Delhi, where he meets and instantly falls for Kusum aka Datto (also played by Kangana Ranaut), a strong-willed Haryanvi athlete who bears a striking resemblance to Tanu.

Rai and writer Himanshu Sharma serve up a first hour that’s light and breezy. Much humor is mined from the exchanges between Manu and Datto, particularly a scene in which she offers a detailed introduction of herself in chaste Haryanvi – down to her address, but naturally leaving out her telephone number. To be fair, the film is peppered with hilarious one-liners, and Rai delivers an authentic portrait of small-town India, complete with characters that are rooted in the milieu. My favorite among these was Manu’s devoted best friend Pappi, played by a terrific Deepak Dobriyal who gets some of the best moments on screen.

Although there’s a lot going on in the film – a love triangle at the centre, a kidnapping, supporting players with their own crises – admittedly the plot weakens post-intermission. This being the story of Tanu and Manu, you know how things will turn out in the end, yet Sharma’s script takes a predictable route to get there. If the climax works, despite being a rip-off of every love-triangle finale from Saajan to Kuch Kuch Hota Hai, it’s because Kangana Ranaut brings genuine, heartfelt emotion to those scenes.

Tanu Weds Manu Returns is no doubt a showcase for the immense talent of Ranaut, who sinks her teeth into this ‘double-role’ challenge, and creates two strikingly different characters. In Tanu she gives us a wild-child defined by her reckless spirit; a girl hiding her pain behind sheer obnoxiousness. No-nonsense Datto, meanwhile, of the pixie cut, buck teeth, and often indecipherable accent, is instantly endearing. The actress makes you care for both women.

R Madhavan nicely underplays once again as Manu, and the feisty Swara Bhaskar returns as Tanu’s best friend, who’s hiding a secret. Even bit players get a moment or two to shine, and despite the occasionally preachy diversions that the script takes, I have to confess I thoroughly enjoyed the film. This is that rare movie that doesn’t derail despite its speed-bumps because you’re invested in its characters and happy to make the journey with them.

I’m going with four out of five for the flat-out delightful Tanu Weds Manu Returns. I haven’t laughed this hard during any film recently. Watch it for Kangana Ranaut, who’s at the top of her game.