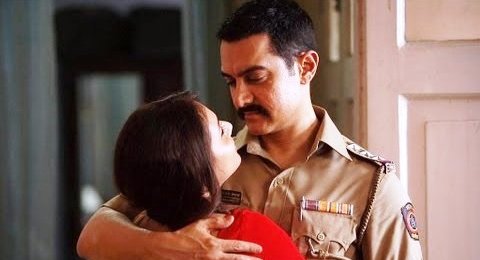 Bathed in a noir-like moodiness, Talaash, directed competently by Reema Kagti, opens with a leisurely paced montage of Mumbai after dark. Wafting across the neon-lit signage of seedy bars, the camera pokes its head into the backrooms of brothels where prostitutes doll up before heading out to ply their wares. Crummy-looking pimps court prospective clients for their girls, an old destitute woman stares blankly huddled in a streetside corner, even as urchins tap hopefully on taxi windows. This is a side of a city we fleetingly encounter and yet it seldom registers in our lives. What Kagti conveys through Talaash is that this is a living-breathing strata of our society, and these people must matter – they deserve humanity and compassion.

These ideas are nicely wrapped in a murder mystery, kicked off the night when a film star drives his car straight into a promenade and plunges it into the sea, killing himself. Inspector Surjan Singh Shekhawat (Aamir Khan) finds himself sucked into the underbelly of the city as he investigates this case that is evidently more complicated than it appears.

Himself straining under the burden of guilt since the death of a loved one, Shekhawat immerses himself in the investigation, even as his wife Roshni (Rani Mukherjee) wrestles with depression and loneliness. As the cop spends long nights driving around the city’s darkest corners in search of clues, he’s befriended by a kindly hooker, Rosy (Kareena Kapoor), who helps him uncoil the maze of this case.

Kagti (with her co-writer Zoya Akhtar) tells a gripping tale that operates on more levels than one. On the surface it’s a juicy suspense, but Talaash is as much about grief and surviving great loss. It’s about relationships and love, and at the same time it’s a story that questions your belief in the paranormal. In spite of packing in many themes at once, the writers keep the film consistently accessible (and occasionally simplistic), but without ‘dumbing down’ the material. Not everything works, though. The twist in the end is cheesy, and isn’t too hard to see coming, but mercifully Kagti keeps the journey leading up to the big reveal engrossing. What’s more disappointing than the twist itself is the manner in which the writers recap scenes to explain it, as if spoon-feeding those who didn’t get it right away.

Still, Talaash benefits from its crisply written characters and the exceptional actors who play these parts. As Taimur, the limping odd-jobs guy in the brothel, Nawazuddin Siddiqui is terrific, inhabiting the role like a chameleon. Playing Shekhawat’s junior officer, it takes Rajkumar Yadav just one scene – in which he’s merely a spectator with a single line of dialogue – to show what a good actor can bring even to a small part. The same is true of Shernaz Patel who shows up as a kooky psychic, and Sheeba Chadha who appears as a past-her-prime sex worker.

Of the leads, Kareena Kapoor brings both oomph and heart to her role, despite the sometimes clunky lines she must mouth. Rani Mukherjee shines as the cop’s desperate wife, investing her performance with a gamut of emotions, never once reducing the character to a pathetic caricature. It’s Aamir Khan, in the film’s central role, who not surprisingly leaves the biggest impression. Shekhawat internalizes his emotions for the most part, and Aamir brings volumes of depth to this troubled man…that furrowed brow, the moustache, all adding to this remarkable performance.

Director Reema Kagti employs a solid technical team to deliver a film that is rich in atmospherics and mood. KU Mohanan’s striking photography and Ram Sampat’s haunting score lend a distinct texture to this film, as do the real Mumbai locations the film is shot on. But Talaash doesn’t feel nearly as tense or urgent as it ought to, and its plot simply isn’t as deliciously complex as it could’ve been. As a result, it’s a very watchable film, but not an unforgettable one.

I’m going with three-and-a-half out of five for director Reema Kagti’s Talaash. Its shortcomings notwithstanding, it’s a good example of an entertaining commercial film that didn’t need to be lazy or senseless. Don’t miss it; easily one of the better films this year.