Thanks to Milind for this link. 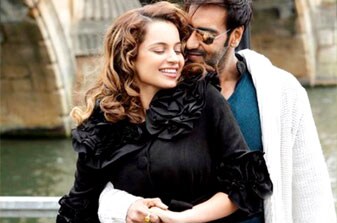 “Diwali’s been lucky for me with films like Golmaal Returns (2008), All The Best (2009) and Golmaal 3. Rascals (2011), that released last Dussera, had a vulgar streak, I’ll never do a film like that again,” says Ajay. “I don’t know about their (YRF’s) film, but SOS is a comic love story with lots of action, a perfect festival film.”

Meanwhile, Tezz that was to arrive on December 23, then January 26 and March 23, is finally opening today. Given that Ajay has no plans to avoid a Diwali clash with SRK, why was he hesitant to take on Don 2, Agneepath and Agent Vinod?

“There was no way Tezz could have come out before. Even though I finished it before leaving for a two-month SOS schedule, the film was not ready till March,” says Ajay. “I was mentally prepared for an April release.”

Tezz has action stunts designed by the Hollywood duo Gareth Milne (Bourne Ultimatum and Bourne Identity) and Peter Pedrero (stunt co-ordinator of The Bourne Supremacy and has worked on the Harry Potter series). Typically Ajay hasn’t been talking about them.

“For me, a technician is a technician. There’s no dearth of them in India. With Hollywood’s budgets and equipment they’d be good. Tezz has some risky stunts but I’m comfortable doing action. It’s easier than dancing!” he grins.

But there’ll be plenty of ‘ta-thaiaya’ dancing in the Himmatwala remake that starts in August. He smiles, “Our Himmatwala is a typical ‘masala’ action movie.”

Action is the keyword with Tezz, Bol Bachchan, Himmatwala and SOS all packing a punch, along with Singham Returns. A sequel to last year’s blockbuster is on the way. He confirms, “Yes, we’re working on the Singham 2 script. It may roll next year.”