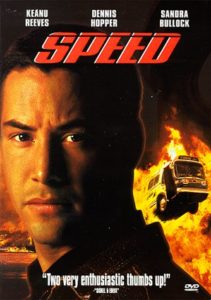 Jack Traven (Keanu Reeves), an LAPD cop on SWAT detail, has a fearless nature and a keen understanding of the criminal mind. That, and some luck have kept him alive. But Jack’s luck is being put to the ultimate test. An elusive bomber-extortionist Howard Payne (Dennis Hopper) is seeking vengeance after his latest ransom scheme is thwarted. Payne gives a personal challenge to Jack: A bomb is rigged on a city bus, which will detonate if the speedometer drops below 50 MPH. Poor Annie (Sandra Bullock) gets shoved into the driver’s seat, while Jack does his best to save the day.

It has a very interesting premise and is a very engrossing thriller except for the stupid climax/ending. The movie could have ended with just the bus part and moved on to tracking/arresting the bad guy but the way Annie gets kidnapped was so ridiculous. The final train sequences were so over the top and completely unbelievable.

Keanu Reeves was very good as Jack. Dennis Hopper was ok as Howard. I think the role needed a more charismatic actor. Sandra Bullock looked cute and was surprisingly not as annoying as she usually is. Jeff Daniels was good as Harry. The rest of the cast was decent.