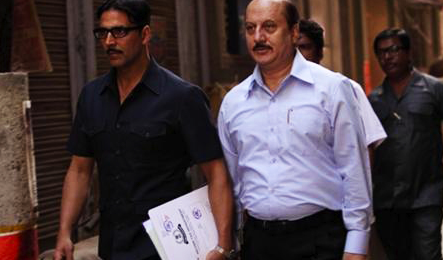 That director Neeraj Pandey knows a thing or two about tension is evident from his previous film, A Wednesday, that crackling vigilante thriller from 2008. This time, he builds drama and a sense of urgency in Special Chabbis, about a group of conmen who posed as CBI officers in the eighties and did daring heists across the country through fake raids.

Truth is stranger than fiction, and so Special Chabbis is based on real events. The title itself is derived from a bold, daylight heist that took place in 1987 at a famous jewelry store in Opera House, Mumbai, that shocked the diamond trade. To pull it off, a team of 26 fake CBI officers were recruited by this group to assist them in making off with lakhs worth of jewelry.

In the film, Akshay Kumar is Ajay, the leader of this band of four conmen that includes Sharma, his right-hand man, played by Anupam Kher, and two nondescript cohorts, played by Rajesh Sharma and Kishore Kadam. The group targets rich businessmen and corrupt ministers, and their modus operandi is to pretend to be CBI officers on a raid. By intimidating their victims, they make off with black money hoarded away. Of course, the fear of a bad reputation ensures that these victims never file FIRs against the group. However, the law tends to catch up with the scamsters soon enough, when the real CBI is hot on their heels, led by upright and driven officer Wasim Khan, played by Manoj Bajpai. His plan is to nab Ajay and his gang right when they are executing their one last heist at that jewelry store in Mumbai.

Special Chabbis works on account of its meaty, realistic plot and nicely fleshed out characters. This is solid, assured filmmaking, evident in the meticulous detailing of its 80s production design. The film charms you with its subtle humor, through characters played by Jimmy Shergill and Divya Dutta – two cops conned into helping our fake CBI officers during a sham raid. These sequences in particular liven up the story, as does the portion where the gang interviews unsuspecting job-seekers to form their team for the big heist.

If the film falters occasionally, blame it on the pacing; the first half feels particularly stretched out because of the needless songs that act as speed-bumps in the way of a smooth narrative. Thankfully the reliable performances keep you consistently engaged. Manoj Bajpayee is a worthy adversary for the gang, and he gives the character gravitas, even though his face seems frozen into a scowl. Anupam Kher, playing Sharma, a nervous wreck when he isn’t pretending to be a CBI officer, gets the tone just right. Kajal Agarwal keeps it real as the girl next door who falls for Ajay, and their romance is sweet. But it’s Akshay Kumar who sets the tone for this adventure – he’s wonderfully understated as the leader of this gang who’s constantly thinking on his feet, and it’s fun to see him brazenly conduct the raids with an as-yet-unseen panache.

I’m going with three and a half out of five for director Neeraj Pandey’s Special Chabbis. Infusing humor into tense scenes, he gives us a delicious thriller that you don’t want to miss.