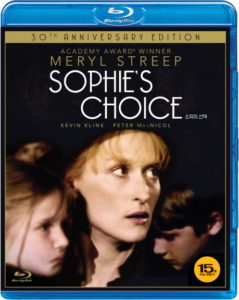 Stingo (Peter MacNicol), a young writer, moves to Brooklyn in 1947 to begin work on his first novel. As he becomes friendly with Sophie (Meryl Streep) and her lover Nathan (Kevin Kline), he learns that Sophie is a Holocaust survivor. Flashbacks reveal her harrowing story, from pre-war prosperity to Auschwitz. In the present, Sophie and Nathan’s relationship increasingly unravels as Stingo grows closer to Sophie and Nathan’s fragile mental state becomes ever more apparent.

The movie is adapted from a novel of the same. It is from the point of view of one of the lead characters and he narrates the movie in flowery prose which is typical of novels. His character seemed totally unnecessary and it felt like he was the Third Wheel whenever the three lead characters were together.

Meryl Streep was excellent as the Polish immigrant Sophie. She looked really emaciated in the concentration camp scenes and she was absolutely brilliant in the scene where she has to make the choice. She deservedly won an Oscar for her performance.

Kevin Kline was very good as the schizophrenic Nathan with contrasting scenes of either being extremely happy or being completely paranoid and jealous. Peter MacNicol was horrible as Stingo and his character should not have even been in the movie.

The movie is quite slow paced and boring for the most part but it has a very interesting back story which actually should have been the main story. The back story is told in flashbacks and is excellent. The concentration camp scenes are very good and the scene where Sophie has to make her choice is excellent. The movie is recommended only if you are a Meryl Streep fan and for the few concentration camp scenes and the Choice scene.